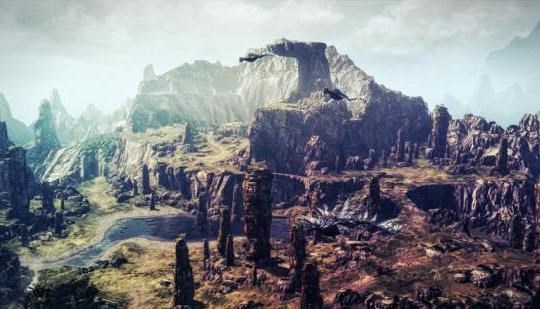 "In a recent interview with Dianne Segovia, the manager of marketing for Nintendo of Latin America, Segovia was asked about why Xenoblade Chronicles X lacks a large marketing push," -- Nintendo Enthusiast.

Well in all fairness, they are interviewing the marketing manager of Latin America. I can't imagine there is a ton of marketing driven into that area period just simply due to the install base in that territory.

I'm from Latin America... Mexico to be exact, and at least in the city I live, Wii U is pretty popular, on par with PS4, and absolutely no one has an XboxOne, and a pretty big ammount of people like JRPG's

fair enough, thanks for sharing.

I don't agree with their thinking regardless. Xenoblade deserves better.

I think fans of niche genres like Jrpgs are willin to do their own research. I've never needed an ad to tell me how badly I want xenoblade chronicles X.

With the genre being small as it is, I think most of us stay in the loop.

We know where are games are and when they are coming out :D

How can you say that? the data we have so far suggests something completely different.

In 2014, the xbox one was reporting to be outselling the PS4 in Mexico. I don't know how much has changed, but clearly 'no one has an xbox one' isn't true.

His city does not represent the whole Mexican territory

Maybe in the whole country that's the case, but I'm just talking about the city I live in

* RPG fans are usually gamers who like paying full price real money for the games they love. They will research the crap out of a game and wait patiently for it's release, and spread the new via word of mouth on game forums and what not.

RPG fans usually do a lot of the marketing themselves to be honest. It's a passionate fan base, not that they are all the same, but RPG fans will know all about it, either day one or within the first week of release.

One Nice commercial couldn't hurt though.

I rarely play JRPG's but this one just looks so cool I can't pass it up. I have been watching this game a long time, and can't wait for this!less than two weeks.

I definitely think this deserves a commercial.

marketing has been nintendo's week point for many years now. they are historically poor when it comes to advertising. its a running joke.

nintendo seem to expect the public to just know when a game hits the shelves. sure, you see the odd advert here and there for DS games on tv, but what about the billboard ads on the street? what about the sides of busses?

ALL the major films and games use these type of advertising, i can honestly say i have never seen a mario billboard, never seen mario on the side of a bus. wouldnt it be cool to see xenoblade in those very public settings? EVERYONE would see it.

They really do need to get some better marketing.

Every time i go to Mexico, Nintendo ads are everywhere... i am sure this game will get some ad here and there but not a lot. tbh i am surprised to see wii u ads on billboards in mexico but then again the market over there is pretty much Nintendo and Sony controlled.

Hmm. I think this makes sense, in a way - they're going to rely on reviews and word-of-mouth. If reviews are high enough, it'll hit bigger outlets that gamers see and visit. If it's talked about a lot, you'll see streamers jumping on board.

But a game like this isn't easy to convey in mass marketing to gamers who aren't big JRPG fans already. They'll need outside assurance, such as reviews and testimonials from friends, in order to assure that this thing is worth playing almost *despite* the art style.

I'm sure the game will be fine, but I believe this game would be appealing to the Anime-crowd, but the lack of the original Japanese voices in this release will also mean negative word of mouth among that community, which usually values having the original language included.

I haven't seen any advertisements for any Nintendo products anywhere since 2008 or so.

I have seen some. A Wii U one, Super Smash Bros Wii U, Ocarina of Time and Majoras Mask 3ds and Splatoon. That's all I can think of off the top of my head. This is in America.

What is your definition of marketing and advertising? Nothing at all since 2008!?

The same as anyone else's. I haven't seen any online ads of any kind, nor any television ads since the "We would like to play" campaign. Hell, even third party marketing for Nintendo stuff is hard to come by because most news outlets either only cover Nintendo, or everyone *but* Nintendo, and Nintendo also seems to really hate the idea of anyone talking about their games on YouTube.

That's just the Latin America branch, though; what about the lack of wide-spread media advertisement out here in other parts of the USA?

Nintendo's weakest point is marketing; it's why the Wii U wasn't named something else, it's why the system doesn't look different enough from the Wii outside of the controller, and in turn it caused them to be unable to explain the appeal of the system appropriately.
That on top of many great games not getting the marketing they need or deserve.

If Nintendo wants to move forward and grab a larger market share with the NX, the very first thing they need to do is HIRE SOMEONE WHO KNOWS HOW TO MARKET APPROPRIATELY IN THE STATES.
Splatoon's marketing was excellent; they need to do more of that for more of their games, if they hope to see the NX launch well, let alone give the Wii U's last two years on the market a better-than-average send-off.

Yes, but it's possible that hiring won't be necessary. They're really getting their bearings with the way both Splatoon (which you mentioned) and Super Mario Maker have been marketed. I'm guessing that, just like with the console, a newer overall marketing strategy is in the works by these guys and we'll see the new look for Nintendo in ads by the end of next year.

I hope that's the case, because Xenoblade X could sure have used some of that Splatoon mojo...

NOA sucks at marketing, they like dont give a fuk.. We are getting devils third soon and no marketing or nothing.

I expect X to get nothing here... Really wish NOA will step up their game.

Makes perfect sense. After all, RPG fans are born knowing exactly what an RPG is and how to play one; they have a natural instinct to go online to look for these games. No one ever just stumbled onto an RPG and found out that they love it. And it's not as if Wii U owners want mature, fantastic open-world games or anything.

I mean, it's not as if any other RPGs have ever been widely promoted, done fantastically well and sold massive amounts of games, getting tons of fans, this gen or any other. I mean, ignoring Skyrim, Fallout 3, Final Fantasy VII, Fable, even Zelda... it hardly ever works, really.

Expect another version for the NX.

Although I may be wrong, but I highly doubt we will see another version for the NX, unless they want to like they done with Xenoblade Chronicles for the New 3DS. If NX becomes compatible with Wii U games, I don't see no point of seeing an NX version. There are rumors that the creators of this game is making the next game, however. so I expect that unknown title could be coming for the NX.

Not going to happen, buddy.

XCX should look great running at the stunning 400x240 resolution of the 3DS, amirite?

..beats admitting your handheld is fading into a legacy😔

I don't agree with that way of thinking. Sure, the fans already know about the game, but also we already know Coke exists and I drink it regularly, but if Coca-Cola stops marketing Coke just because we already know about it, I can assure you people will eventually forget about it and their sales will drop significantly.
There are lots of people who may not care about Xenoblade X, but they could see the marketing and think that the Wii U has cool games and may end up buying a Wii U to play something else. Nintendo keeps giving excuses to justify their incompetence, why I'm not surprised?

I've seen a fair amount of it. There was like three ads for it in the newest Gameinformer.

Jokes aside, ever since word of NX hit the surface, I'm holding off and hoping to see some select games that are on the wii u, appear on the nx.

That way I won't feel like I just purchased a console with the lifespan of a gamecube.

At this point I'm wondering if a part of the lack of advertisement might be due to all the complaints being voiced about the costumes and boob slider.
We already had extremist feminists like Anita and her gang of inbred harlots bashing the Japanese version for having a 13 year old in a bikini.
I wouldn't be surprised if the amount of whining about that stuff being taken out is a part of the reason why they don't seem to want to call an overt amount of attention to the game...

I don't always play JRPGs. But when I do. they are rarely advertised properly.

I'm not saying whether it is right or wrong, but I think the lack of marketing is due to realistic expectations for the game not likely selling well to justify the marketing budget over there. It already under performed in Japan with sales somewhere around 110,000 copies in its first month of release where it also quickly fell out of the top 20 chart too by the end of June. Also, as we know, Wii U has done poorly in Europe, and in places like the UK where the console can be found for cheap, consumers just don't care much about it, so Xenoblade X will likely sell poorly there as well, but with worse sales than in Japan. Obviously, Nintendo of Latin America must have a considerably smaller marketing budget to work with between Wii U and 3DS software compared to the other branches of Nintendo.

Quite frankly, Xenoblade X's sales rest on the shoulders of North American Wii U owners, and like with most of Wii U's software, it will just mainly appeal to most gamers that already own a Wii U. Sales in its first month will probably be at best 150k copies. Well, maybe less than that even.

Forget Shulk, These 5 Xenoblade Characters Should Be in Smash Bros

Where Does Xenoblade go From Here?