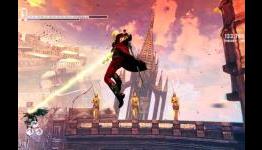 Max Wallis writes "When DmC: Devil May Cry came out in 2013 developers Ninja Theory polarised fans of the high-octane action series. DmC was a reboot, a ‘bro’ take on the half-demon Dante, re-imagining him with dark hair instead of white. They stripped him of his human-half origin and, importantly, made him half-angel, half-demon instead. Gamers were dubious of Ninja Theory, developers of Heavenly Sword, taking over the franchise. Why did Dante suddenly look like the lead singer of the emo band My Chemical Romance?"