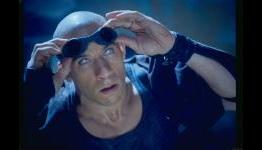 Amped Up Riddick Sequel On The Way

Rumors have it that the long-awaited Riddick sequel is gathering steam and is busy casting sexy new characters. The sequel as of now is being called Riddick, and is concentrating more on being a direct sequel to the original Pitch Black instead of a continuation of the commercially disappointing The Chronicles of Riddick. This third installment in the sci fi saga of a galactic bad-ass antihero will see original director David Twohy re-teaming with Pitch Black star Vin Diesel.

I don't know how the Chronicles film earns so much hate. Yeah Pitch Black was better, but there were plenty of bad ass scenes in the Chronicles film as well all it really needed was a Mature rating which the upcoming film will have. Death by Teacup anyone?

The 9 Best Video Games Based on Movies

GameEnthus Podcast ep393: Whopper of a Whopper or Canvas Bags or NPCs not both -

5 Games That Came Close to Greatness This Generation - Brash Games

Shooters You Should Play Instead of Battlefield 3: Chronicles Of Riddick

Kao the Kangaroo - All The Lava Caves Collectibles Locations