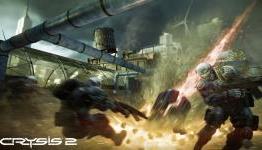 Bryce Wilson of RipTen; "Crysis 2 on the PC has been riddled with people cheating and hacking their way up the leaderboards, and thankfully Crytek has said "F*&* this!" and issued an anti-cheating update..."

Good job Crytek!! Ignore SLI/Crossfire flickering, DX10-11 support, messed up limited edition codes, inability to log in and/or play online. But hey we can all have a hacker free game that the majority CAN'T EVEN ENJOY ONLINE! Woo hoo!

I wish I had more hands, so I could give this comment 4 thumbs up!

You're not entitled to anything, so stop whining.

Don't buy a game early if you're going to moan about its problems.

Frequently, I see posts by people that more or less read like this: "Omg! DAY ONE!"

Yeah... if you got the game within a week or two of launch, stop bitching. Really, just stop.

Many games, especially multiplayer games, will suffer from the very same issues that you're bitching about right now.

Inability to log on, inability to play online, dud codes, GPU driver issues are all common problems that plague game launches this generation.

Bungie had the same problem with all their Halo games.

Infinity Ward and Treyarch have the same problems.

YOU ARE NOT ENTITLED.

Clearly, Crytek is working on fixing the issues.

They're working on making sure the cheaters are removed. And they're preparing patches.

These types of problems occur most often when a lot of people are playing. They could not be detected otherwise and therefore you can't blame Crytek for not seeing the problem until now.

They couldn't have detected it before launch, and they damn well can't account for every driver hiccup before the game launches.

As for DX10-11 support, that's a console issue. Crytek's budget and limited resources did not afford them the time or money to code the game differently across three different platforms.

Your username is PS360WiiRocks, right?

Well, they don't rock. Fucking DRM machines that you have to buy separately to play games that could have been made much better on PC do NOT rock.

Really Kaveti? First off my name is PS360WII for a reason and that reason is that this site wasn't really about PC in the beginning. I have a PC and a very good one at that and that is what i am playing this on. There is a HUGE difference between a game launching with issues and a game having flat out issues. Some of these things are entirely inexcusable and make it impossible for their PAYING customers to not be able to enjoy the game they purchased. Not only that, they choose to ignore the myriad of issues and not even COMMENT or acknowledge them, and than release patches for cheaters. When your customers have payed you money for an experience you can't deliver, that you promised, you have issues. I applaud them for fixing something, but they have bigger fish to fry. Also, yes I am entitled, I paid $60 for this game, therefore I am entitled to complain if I want too.

No you're not entitled.

People who are experienced in these matters know that launch customers are not going to get the best experience 9 times out of ten.

Also, you're complaining about the game now and calling the problems inexcusable.

If I happen to buy the game three months from now for 40 bucks, I probably won't encounter any of the problems you have experienced,

The only difference is time.

You seem like a pretty impatient person to me if you're going to buy a game "DAY ONE!!!"

How old are you?

Do you have any financial responsibility or sense at all?

Why do you purchase a game for a full 65 bucks and then proceed to complain about your purchase? If you were experiencing these issues 5 months after release then maybe I'd feel some sympathy for you, but you're the one who chose to buy the game early on.

If you have issues then go to their website and address it in their official forums. Don't complain about the issues here because Crytek likely won't see your post. Seems to me like you're just complaining here to trash on the game.

what does buying it day one have to do with anything? I was at Best Buy a few days after release and saw the game and bought it. Things should be made to work out of the box as they are advertised. If you sell a product it damn well better work as advertised. I think your way off the mark and have COMPLETELY missed the entire point of everything I have said and choose to argue because you want to be right. Your wrong and your mindset that you should wait to buy something so that it works is ludicrous. This is not a electronic device that may have a hardware issue at launch. This is a game, a game that was developed for THREE years. It's software, it's tested, it should work right every time as advertised. Games used to work before the bullshit online console era came around.

There is no excuse to not have crossfire and SLI compatibility and have it cause insane flickering. No excuses for no cheating support, no advanced graphics menus and so on. No ability to play online, log-in, access limited content and so on. This game has a myriad of issues and it wasn't ready for release on PC. I'm glad that you think that games should be released broken and fixed later. Your the exact reason why developers pull this shit, because people accept it.

I do love how you say that I am not entitled, that i am not allowed an opinion or to share it. Yet, here you are 2 comments in replying to me to shove your logic down my throat. Who made you entitled to judge me or my purchases and/or reasoning? I would go to the mycrysis forums and frequently do, unfortunately issues are ignored their as well. You've missed the point though so I am done replying to this any further. Maybe you should head to the mycrysis forums and read the hundreds of threads yourself of people who are unable to play the game they purchased. Who ask countless times to mods and the developers about countless game breaking issues and the mods ignore them.

My rant is not about a game with issues, it is about a game with issues that they will not address. Btw to answer your question i am 25, a mechanical engineering stuent and pay my own mortgage. I have financial liability and that is the reason i don't like throwing away $60 on something. Btw don't try and talk down to me like i am a child.

" Things should be made to work out of the box as they are advertised. If you sell a product it damn well better work as advertised. I think your way off the mark and have COMPLETELY missed the entire point of everything I have said and choose to argue because you want to be right. Your wrong and your mindset that you should wait to buy something so that it works is ludicrous."

You're 25 and have a mortgage? And you still choose to live in a dream world where everything works as advertised?

Early adopters of all products are going to suffer from the technical glitches that are ironed out in other iterations of the product.

With software titles, the glitches are fixed through patches.

It's not a big deal and actually it's you who supports developers who do this, not me.

You're the one who bought the game just a few days after it was released. I never do that. I always buy games several months after release because they drop in price and the developers have by that point released several patches for it.

Why are you saying that I support it when it's actually you? You're basically complaining about something that you put yourself in the position to experience.

What kind of a 25 year old college student who has a mortgage to pay off and who knows what other bills (tuition, cellphone, internet, etc) goes out and buys a game full price without doing any research on the internet to see what kinds of problems the game has at launch?

" Yet, here you are 2 comments in replying to me to shove your logic down my throat"

If you feel that I am "shoving" my logic down your throat, it's only because you're resisting my logic. Just let it go down easy, okay? Accept that you made the mistake in buying a game for full price just a few days after release, and now you're paying the consequences? Do they have "real world common sense" courses at your university?

It really boggles my mind as to how big a cock you have to be to enjoy cheating.

It really boggles my mind as to how big a cock you have to be ON to enjoy cheating.

Hit them with an eternal perma-ban. Forever.

Seven IPs That Can Save Xbox