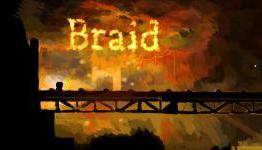 In response to an CVG article named: "Braid creator: Sony takes more risks than MS with indie game choices" Jonathan Blow says: "CVG’s article is a deceptive, manipulative piece of sensationalist crap meant to drive hits by stoking the argument between Sony fans and Microsoft fans. It misrepresents the content of the interview almost entirely...."

The cyber police won't be happy. I think they're in for a backtracing.

the consequences will never be the same.

The sad thing is that people were agreeing with the article because of what it said about MS because people had that pre-conceived notion. As a result the article was easy to write. Most people here don't investigate what they read and simply agree when they see a headline that tells them what they like to hear.

XBLA has been terrific for numerous indy games-- Castle Crashers, Braid, etc. XBLA has a ridiculous wealth of games. It's one of the most impressive things about XBL.

I respect this man, Braid was a amazing game, the witness seems very interesting too. Wondering if he had a full budget studio to make a full game, how it will put games these days to shame.

I agree, Journalist these days stir up arguments within fanboys to get hits, its sad how 90% of articles on N4G are anti/Pro Xbox 360 or PS3 and in comments section fanboys fighting and having troll wars. Why do people fall for this shit? Who cares enjoy your systems enjoy your games. Thats all.

CVG are the worst kind of scum. Not only do they use inflammatory, out-of-context headlines, but the associated stories are lifted from other mags/websites! They are truly the lowest of the low.

"CVG’s article is a deceptive, manipulative piece of sensationalist crap meant to drive hits by stoking the argument between Sony fans and Microsoft fans. It misrepresents the content of the interview almost entirely. (Chris Hecker, who was half the interview, doesn’t even appear in their write-up. This alone should make it clear that they have no interest in truthful and accurate communication.)

Damage is clearly done, and CVG are doing this damage just so they can make a little bit of money off a few more web hits.

I encourage everyone out there to stop reading this kind of stuff. It’s just misinformation; it’s worse than worthless."

Nice, one more site added to my banlist.

I hate journalists that twist truths into half-truths.

I already knew they were a sensation site just like hip hop gamer. He may love gaming but im sure he loves the money you guys get him by clicking on his even more.

CVG isn't the only culprit. This is the state of video game journalism.

all one big joke to CVG

"Damage is clearly done, and CVG are doing this damage just so they can make a little bit of money off a few more web hits.
I encourage everyone out there to stop reading this kind of stuff. It’s just misinformation; it’s worse than worthless."

I'm going to go a little farther than the above quote; you should not only stop reading bullshit from CVG, but ANY site that prints blatantly obvious fanboy trash to get hits. It's an absolute embarrassment to anything resembling 'journalism', or 'writing'.

That one person disagreeing with you is HipHopGamer.

Oooooo, The Witness. Never heard of it before this.

That's pretty shit tactics from cvg doing that . makes you wonder how many prople fall out in game industry as a result of media twisting interviews .

A huge number of articles posted on N4G are designed to be inflammatory, and a number of users reply only after reading the headline when it's the article that picks and chooses what quotes to keep and what quotes to throw away.

It'll be a great day when those sucked into the console war actually READ the article to see how much shit is flung.

Not a good move, CVG.

Wow, I have to commend him for writing that out, even though it might hurt his relation ship with what many people consider a popular journalism outlet.

I'll be appalled albeit un-shocked if the witness recives less then favorable reviews to all sites related to CVG due to this incident. But good on him to tell it how it is.

I can't believe I haven't played this game yet. Some gamer I am.. It's on my list though. One of these days, but it's going to be a busy 2011 gaming wise.

I would suggest you get Braid with this offer, even if you don't have time to play it right now.

people should check this out, I have the impression that not many people know about it

Been spreading that link as often I can while trying to not make it look like spam. Great set of games for a great cause. The recent incentive to push the average up by giving out the games from the first humble bundle is fantastic.

So far a very amazing $1.5 million :)
Only two days remaining so keep passing it along.

Back on topic. Meh Ive made it a habit to avoid sensationalist sites and just hit up news of releases and read up on full interviews instead of another interpretation of one. Gaming is getting too political in the online world.

Wow, thanks a lot. I have the site bookmarked and I will check it out later. Seems like a great deal and it's for charity too(hopefully a good one). I hope more people find out about that deal as well. I'll spread the word.

it's for child's play and EFF, child's play is a good charity imo, but I don't really know about EFF, it doesn't really seem like a charity. Luckily, you can divide your donation between whoever you want (developers, organizers, charities).

i just bought the bundle! thanks for thr link... i'm from The Witness aswell... is there a way i can add you? or you can add me as a partner? i might publish here some articles from The Witness if i get permission from john

I can't say that I'm "from" the witness, I just follow witnessgame on twitter, and clicked on the link.

I'm not sure I get it, you want to be an N4G contributor? If that's the case, you just need to pass a test and you can start contributing.

What's funny is that Jim Sterling at Destructoid is trying to get deeply involved in this now claiming he accidently instigated the whole thing by quoting CVG who misquoted and interview with Edge.

If you actually read the article rather than the headline, you'd know that Jim actually has some rather interesting points on the matter. He's not "trying" to get deeply involved, he was involved to begin with.

Whatever cvg are losers you think people on this site are fanboys the gaming media makes us look like saints.

I love CVG as I grew up with them, but I love Braid also

as long as CVG learns its lesson

C&VG used to be an amazing gaming magazine, one of the best in the UK. now its lost all credability, luckily no one who worked on the mag works there anymore and since it went online only it just became "a shadow of its former self" (resi) a big pile of shit. im sure the guys who worked on the mag would be ashamed of what its become.

hell its an insult to put it in the same breath as the C&VG i knew.

What's the best secret you've ever found in a game?

Top 25 Best Indie Games of All Time, Ranked From Great to Ground Breaking

10 of the Most Beautiful Game Soundtracks