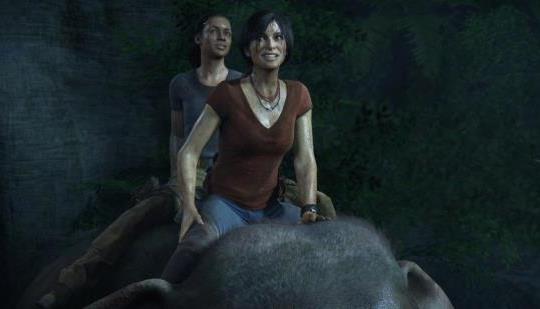 Uncharted: The Lost Legacy May Be the Best Introduction to the Series

Uncharted: The Lost Legacy may not be the most popular game in the series, but it provides the easiest way for newcomers to experience Uncharted.

judging by the pic it look like th...wait i forgot cant say that nomore 😁 anyway im looking forward to playing uncharted 4 again on the PS5

The game is not the best intro to the series. It assumes the players are familiar with the characters and world so doesn’t bother much with exposition, what DLC does? But for newcomers they may feel disconnected from this bite-sized chapter. Honestly, I’d start with Uncharted: Drake’s Fortune.

Time have change huh? but this will be my third time playing uncharted 4 and second time for UC: Lost Legacy when i buy the $10 upgrade for PS5

@VenomUK to me UC:Lost Legacy was better than UC4 still tho both are good games either way

I want some of what this "Writer" is smoking

Well, from a gameplay standpoint it makes sense. It's a crash course of all things Uncharted, from 1 to 4. But from a narrative perspective... Lost Legacy is basically Uncharted 5, so... Yep... You shouldn't touch that after playing all the others, too many references and characters that only appear very late on the game series.

Edit..oh lol. Its from the same writer who wrote the "Why Senua’s Saga: Hellblade 2 Deserves a PlayStation Release" and "Why GTA 3 Is the GTA Trilogy Game That Has Aged Best" . Ouch.

The more controversial articles you write the more people want to comment on that, meaning it will heat up which means he get more clicks and more money.

No need to write a good article, the internet money has ruined that for good.

These "journalists" often create the perception that their idiotic ideas are the prevailing thought but people don't realize that many of these writers write similar articles or push the same agenda for multiple pages making it seem like there are more of them. Anymore I see most journalism as either propaganda or grifters.

No, The Lost Legacy takes place after all the other Uncharted games. It also features mechanics that are not present in the PlayStation 3-era titles. Playing the uncharted games in order will let you see Chloe’s progression from criminal thief to a much less self-serving anti-hero.

Nah. Just start with the first game, there's nothing wrong with it.

IDK.....Lost Legacy was for me weaker part of series. Absolutely more acceptable by women - and maybe that was primary target group. I loved the series because of Nathan aspect. He is something like Indiana Jones. These girls arent. But they are also interesting and fun.

I actually finished the game over the weekend and I feel like people would miss out on a lot if they just jumped into Lost Legacy first. There are so many references to other games and little moments that would fall flat because you would lack context.

I would play them in order they were released. You know story and stuff.

I redownloaded the drake collection when I got my ps5 to replay the games again and omg uc1 is one of most annoying games ever lol. The gameplay in 4 was so satisfying and going back to 1 felt like a chore especially with the waves after waves of enemies on brutal. I'm not even gonna talk about the jetski level because it just made me close the game and play something else

I like 1 still but we all have our preferences . I go back and play old games often so UC1 doesn’t bother me at all .

I was playing through the series for the first time around a year ago. I didn't mind the gunplay, but that jet ski level was where I called it quits. Still haven't gotten back to it.

I beat UC1 on Brutal a week ago. The jetski sections are a breeze compared to some of the regular gunfight sections. The last jetski section up river I literally beat on my second attempt. You are in total control of enemy spawns so just proceed slowly. The enemies don't move either so just identify where the gunfire is coming from and blow them away. Even easier in the first sections when Elena has a grenade launcher.

You want frustrating? Get to chapter 11 on brutal, have the game crash, corrupt your save file, then find your PS5 is NOT backing PS4 save files up to the cloud. All progress lost! Happened to me.

Alternatively, play UC2 on Brutal. Just got past the runaway train section. Wow. If you think UC1 was tough, try this. Literally multiple respawn points where you can die in under a second after respawning! Oh, and the bit where you hang from the sign with nothing but a pistol...

It’s the second best uncharted game after U2. I wouldn’t mind if Chloe took over the series.

Start with 1 , not a smaller side game . It’s the last game you should play actually .

Hardly. Nathan Drake and his adventures are the best starting point.

Gamerant is quickly becoming as dumb as gamingbolt.

It's not a good entry since a big part and joy of the game is knowing the character's history and how they subvert their past behaviors and grow within this title. I guess if someone doesn't care for the story and is just looking to dip into gameplay then maybe.

It really isn't, lost legacy is so much better when you know Chloe's story.
People should play from number one, through to lost legacy.
The Nathan drake collection is very cheap on PS4, so anyone wanting to get in to the series should play them, then 4 and lost legacy.
Golden abyss is also a good addition to the story but not needed, really enjoyable portable game, not up to the home console counterparts but still a decent game nonetheless.

But yeah, lost legacy isn't a good starting point, that's just my opinion but it's really worth it playing through all the games.

this game always make me excited

Tom Holland will be in Uncharted movie as the Main character. my personal opinion..... I'll pass.

Uncharted on PS5 forgets its most precious relic | TheSixthAxis

Share of the Week – Uncharted: Legacy of Thieves Collection – Landscapes