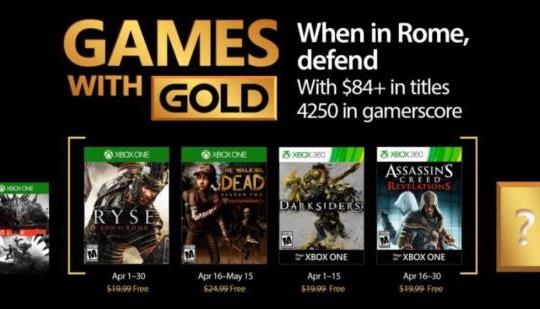 Are the free Xbox Games With Gold titles for April 2017 any good?

Carlos writes "April is pretty much here and more free games are coming our way. The question is, are the free Xbox One and Xbox 360 Games With Gold titles for April 2017 actually any good?"

Why would you assume either of those things?

No Darksiders has been exclusive and on top of that PS4 has double the number of units it would be silly to go even timed exclusive.

And Ubisoft this gen has prioritized PS4 on basically every game that have had any kind of marketing agreement with this gen, why would you think that would change?

How is Microsoft able to offer big titles but it's main competitor doesn't seem to as much, especially when so many claim the Xbox One has no games?

Well I guess if you have a console with no new games you may as well look forward to playing 4 year old games and games from last gen.

I'll let you know how Persona turns out it's already getting amazing reviews.

...really? Did he say anything bad regarding your Godly PS4? All he said is he is excited to play these games again. Not even a little mention of the word "sony or ps4". I guess you insecured ps4 fanboys never have any class in your life.

You have low expectations, but that's understandable if your willing to accept Microsoft as your console provider.

As for Microsoft being my console provider am cool with them and have no issues . Besides am no fan of Sony . So again am good with my xboxs . You enjoy your platform of choice.

I've said this before but Sony fanboys are now worse than Apple fanboys. Hard to believe that was ever possible, but here it is.

Not really. Darksiders was awesome but nothing else is really all that great. AC: Revelations was the worst in the AC2 (unneeded) Trilogy. Ryse was a garbage QTE game with a terrible story and pretty graphics. TWD S2...well it's a TT game, anyone who does enjoy TWD has already played it years ago.

lol nope Ryse was an amazing overall experience. The heck you smoking?

An amazing overall experience? And you're saying HE'S the one that's smoking?

The only reason Ryse was popular was because it came out at the start of the gen when there were very few games.

It's a short game with a mediocre story at best.

Ryse was utterly brilliant. Never understand how anyone can hate on it.

@Kryptic - aren't most games though? The vast majority centre around the same old stuff over and over again.

This is one of the worst month ever seems like they've already given us these games before.

Haven't played season 2 of twd yet.

What a stupid question asked in the headline. This is one of the best months ever for GWG. There has been quite a few good offerings this year already, and this is just another wave of pretty awesome titles.

I actually can't wait to check out Ryse. It's one of the exclusives I figured would make its way to Games with Gold eventually but people who've played it seem to enjoy it.

I have Darksiders digitally already but not AC:R so I'll enjoy playing it again. 🙂

April looks to be a great month for Games with Gold with it sporting an exclusive plus other solid offerings.

Here I am, thinking this is one of the best months and I read comments where people say its the worst! LOL~

Whats up with that many dislikes? You really think this is a bad month?
https://www.youtube.com/wat...

The sadly hilarious thing is individuals seem to think the downvotes matter while they abuse the exact same system, degrading it themselves.

I'd gather one of them has posted a few times attempting to troll in the same timeframe. 😉

The proof is in the pudding. I posted a tad bit farther down all the PS+ offerings in April along with listed release years to a comment suggesting Games with Gold is getting older bargain bin titles compared to PS+. No part of the comment is an opinion or misleading even pointing out GWG already received one of the titles PS+ will be getting in February.

Yet there's twice as many downvotes to the same comment. No opinion to differ from. The same release periods can be verified for each game even from the online PlayStation Store.

Nothing more than fantools attempting to justify their purchase but realizing that this month in particular GWG stomps on PS+. Even the metacritic scores of the PS+ offerings are abysmal and many are barely expressing full enthusiasm for the feature April PS+ title that is Drawn to Death.

Everyone should try Ryse, its a great game with fun MP. Walking Dead is a no brainer (see what I did theire??), awesome game. Darksiders and AC are great aswell. Overall a really good month.

Much better than the competitions April offerings. I'm looked my forward to trying Ryse for the first time.

If you say so... Microsoft is offering a bunch of really old bargain bin games most people have already played while Sony is offering brand new games.

Drawn to Death is the only new title. Lovers in a Dangerous Spacetime came to Games with Gold in February and came out a year earlier on Xbox One.