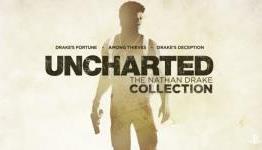 Is Uncharted: The Nathan Drake Collection Definitive Without Multi-Player?

In case you haven’t heard, the upcoming PlayStation 4 exclusive remaster which includes all of the PlayStation 3’s entries in the Uncharted series, called Uncharted: The Nathan Drake Collection, will not include Uncharted 2: Among Thieves’ and Uncharted 3: Drake’s Deception’s multi-player modes. Instead, it’ll give players access to Uncharted 4: A Thief’s End’s multi-player beta. But is it enough?

Yes it is, it's the singelplayer portion of the Uncharted series that really defies the game, not the mp portion of it.

people like you need to stop claiming why everyone plays an Uncharted game. some people actually liked the multiplayer in Uncharted. just because its more well known for its single player doesn't justify removing the multiplayer. with this logic why didn't they remove the multiplayer from TLOUR ? sheep will always defend their favourate faceless companies. they could give a turd in the box and sheep would still defend.

I have always bought Uncharted for its campaign. Multiplayer was an afterthought, for me at least.

The Last of Us Remastered included the multiplayer portion because it came out a year after the original, and also retailed for £50/$60 with no sequel in sight.

Comparatively, the Uncharted Collection includes three campaigns, and a multiplayer beta for Uncharted 4; which is scheduled to release within 6 months after the collection.

On topic: It's worth it!

Well, did you ever consider these few things first: Are the servers still up for the Uncharted MP games? If they are, people can go play that still. Also, thye probably wanted to limit space on the disc unless it's on several discs. and also, Most people who buy these games are NOT in it for the MP at all. When MP was first announced in Uncharted, A lot of people initially groaned and whined saying "Oh NO, they're shoehorning a superfluous feature nobody cares about into out game and it will diminish our SP experience". Then people realized that Naughty dog actually did a decent job and it caught on. But unless they plan on really supporting the MP servers, why bother adding it? I'll bet Most people will not find this to be a deal breaker. But, that's just my opinion.

Whilst I agree (I didn't play the multiplayer much in UC2 & 3) I do see why some people are annoyed that multi player has been removed for this release. For me though it's all about the single player and I'm quite happy with three great single player experiences.

The truth of the matter is, the reason this collection does not include multiplayer is because it would have taken Naughty Dog longer to complete the re masters and the collection probably wouldn't have been finished in time for this holiday season. There was no way Sony could afford to NOT have this game collection out this year, especially with the delay of Uncharted 4.

Reimplementing Multiplayer is pointless and not needed. I would much rather ND invest time in making the collection run perfectly rather than messing around getting multiplayer to work on PS4, and then having to support additional servers for the next couple of years.

EDIT: Just look at the trouble 343 have had getting multiplayer to work on the Halo collection. By the time they get it 100% fixed Halo 5 will probably be out! Why risk all the extra time and effort getting something to work that is already a legacy product - people move on quickly.

While i would've enjoyed playing the MP again I'm totally fine just playing the SP of this game. Its only a matter of time until uncharted 4 drops and with the beta, mp is confirmed so i can wait for that.

I'd I've liked to see the MP included personally, never played it much but completed the single player more times than I can remember.

Well hopefully the beta makes up for that.

in my opinion, yes it is worth it. i bought those games for the fantastic story they bring, and will buy the collection again for the same reason.

The 5 Best Remakes and Remasters on PS4

Announcing the Play At Home Initiative