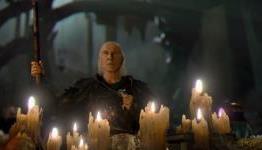 Whatever Happened To The Dark Sorcerer?

Quantic Dream impressed everyone with this tech demo back at E3 2013 but since then, we haven't heard much about it. Maybe fresh news this year...?

It was just a tech demo, probably has very little to do with Quantic Dreams actual PS4 game

You know what's hilarious? Neither Sony nor quantic dream ever said this was a game or a future game. That Idea was placed in everyones head by game sites creating rumours and pandering for clicks. Now, they're gonna start criticising Sony for not developing a game they said was a tech demo in the first place in order to create more clicks. Where will it end?

@John Eactly. It was just a tech demo showcasing the level of detail and graphics the PS4 will be able to pull off.

The Killzone, Drive Club and Order 1886, Infamous Second Son is only the beginning of what PS4 will pull off, graphically.

Quantic Dreams game will make you question reality itself when they show off their new project.

Sony and Quantic Dreams repeatedly said, on stage and in interviews, that it was not a game but purely a demo.

GOD!!! it's unbelievable how ignorant media is..
when did quantic dream ever say this is taken from a game?
We have FF7 remake syndrom all over again.. people hype things by lying so keep believing. And even if this gets released, same trolls will call it movie not a game.
tech demo and game aren't necessary the same thing. i'm still waiting for FF6 on N64
https://www.youtube.com/wat...
repeat after me: TECH....DEMO

Well, "The Casting" used a character and environments from Heavy Rain and they casted for a production called "Heavy Rain", so that's not really much of an example.

But yes, they apparently did the same with Kara.

Whatever happened to the approval system? why even approved this crap?

Nothing, that just was a tech-demo

Funny how they say that in the article too but then rant about them not talking about it. People REALLY need to learn what a tech demo is. Too many times have they shown off a tech demo and people think it's a game: Final Fantasy 7 HD, Final Fantasy 8 ps2, The Zelda tech demo, now this. It just shows the incompetence of some people. This is exactly what we've been saying when they showed off the new zelda and people went "What about the other Zelda you guys announced" and Final Fantasy 7 "Why announce a HD remake of Final Fantasy 7 of you won't make it". Tech-demos are tech-demos, nothing more.

Tech-demo or not, I kinda liked the idea if it were a game.

He quit his job.

Thats what happened to the dark sorcerer.

It was just another "kara" tech demo

It was a pre-rendered tech demo of what to expect in terms of graphics quality from the PS4 in years to come.

"It was a pre-rendered tech demo"

Nope. You can watch a video where they change the camera angles within the demo and manipulate the lighting. That's proof that it wasn't prerendered.

Whatever happened to gaming journalism?

I'd rather have a game based on Kara than The Dark Sorcerer, but they were both simply tech demos.

5 PS4 games that would cause pandemonium at the PS Experience

Quantic Dream’s New PS4 Game to Include “Monsters;” Is it The Dark Sorcerer or Something Else?

Shu Yoshida: Games Like The Last of Us Will be More Impactful on PS4; Will Cross the Uncanny Valley

AAA Games Need to Stop Being So Serious