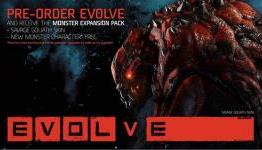 Evolve has been a controversial game, even before it’s release. The heavy use of pre-launch DLC, and pre-order DLC, enraged a number of people. The large focus on online player meant the game needed a strong, consistent, player base in order to thrive.

Victim of their own bull crap. Aggressive DLC marketing, taking content out of the game to flog off as a lay to win option. The hype, the massive launch parties. It's a free to play game wrapped with a retail priced, with chunks ripped out to sell separately .

Have you seen the ending ?!

lol the ending is such a joke.

Yet it has a 77 Metacritic, a clear proof of how reviewers deal with severe anticonsumer practices.

Hopefully they loosen up the DLC reigns a bit and give folks a reason to come back.

Evolve *cough* 'game of the year' edition (or Gold as they called it way back when) would be a pretty good option. Or just make it Free to play and sell characters/skins/weapons...tho ugh i doubt that would be a financially viable idea at this point :(

I think 2K is the one at fault here. I've always seen TR's games as light on content and multiplayer focused from the first CS days. However, 2K is not one to handle games like this correctly so I assume they tried presenting it like a AAA dudebro game and that killed it.

Fully 2Ks fault. They have been their own demise for quite a while.

If you can recall a few years ago after the release of Bioshock they made a fantastic about how they could make sequels and annualize their games like other studios but won't. Low and behold Bioshock 2 releases and gets mixed reviews, that gets canned until Irrational has to get back on the reigns and release Infinite.

Then they talk about not spamming with DLC and paid content, and almost every single game have released is full of pay for DLC. From Borderlands, to NBA 2K, to now Evolve.

All full of DLC and content that could have and most importantly could have been released day 1 with the game.

Shame, the concept is good, and actually a little creative.

I hope Publishers and developers understand it was not the creativity of the game that crushed it, but all the DLC bs and/or full price game.

I don't think it has anything to do with the DLC. I think it's more to do on the multi-player aspect of the game. Getting 5 players together who aren't friends and have them work together is frustrating and I can see a lot of people dropping the game for that reason.

I played the game with friends and it was only fun when everyone was in the game playing. The AI is okay but it's not the best and no where near as fun is a real person was playing.

And had to return it to Gamefly because there just wasn't enough times to get all my friends together to play this. I think this might be a reason why it dropped off.

Edit:
Even with someone as the monster, you get a person who isn't experienced and is easily captured/killed. Or doesn't take it serious enough. It's definitely a better experience to play this game with 5 friends.

"Getting 5 players together who aren't friends and have them work together is frustrating and I can see a lot of people dropping the game for that reason."

It's 4v1. Don't think the monster wants to play friends...

Well if I was the monster I would get bored with winning countless times against idiotic teams. That's what I saw happen to a streamer when he played monster.

Can't say I am too surprised..I rented this game and my goodness...after about two or three good matches, I got bored and wanted to just put it down. I ended up playing six total matches and then I returned it. Great concept and all...but just mediocre execution.

Many Youtubers said this would happen.

I played the game for a weekend and even though the polish is there I just wasn't too impressed with the game.

All I could think of was "they made this instead of L4D3?"

Was this game ever supposed to be played for long? Seems like a rent and forget game to me. No way am I supporting this with all its DLC bullshiz

Hope the same thing happens on consoles, who the hell wants to pay for a ton of DLC on top retail price.