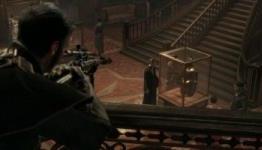 The Order: 1886 is visually astounding throughout, but the actual game is crushingly average -- and that's when it lets you play it! That said, the shooting sections are fun and the Thermite Rifle is superb. Brendan reckons that the level of detail elevates what could have been a terrible game into one that's worth checking out so long as the price is low enough. £29.99 is a good start. "

Damn! we need that kind of deal here in the US.

It seems like it should have been priced similarly to the downloadable releases you see from developers such as Telltale Games. They offer similarly short games with limited interaction and a focus on story, and they also don't charge $60 for them. Sony probably should have released The Order as a $15-$20 downloadable game, I doubt people would have felt as ripped-off if that had been the case.

I think it's a similar situation to Metal Gear Solid: Ground Zeroes, but even then I think Konami had the sense to ask $40 rather than $60, which people still considered to be a steep asking price for what was being offered.

Nothing wrong with shorter games really, just price them accordingly rather than expecting people to pay $60.

I think the only reason it should ever have been this price is because it had only one mode.

Nah, I'm fine with SP only games and I gladly pay top-dollar for quality solo-only experiences. As an example, Max Payne 2 and Panzer Dragoon Orta were both short, but they were both superb and worth replaying multiple times.

The Order just should have been better, not longer.

Well then you'll get your moneys worth :)

This game is going to get slashed pretty quickly. It had one good week and then people stopped buying it and the gamestop returns were enormous.

AKA 90% of video game releases.

So true. I hate returning games personally. Even when they suck (like CoD 3 and Marvel Ultimate Alliance). I like to just keep a collection handy. I often go back through my library alot.

Cool, you mentioned three games, I bet they fall within the 10% of games that weren't part of my statement.

Seems like a premature assessment, for sure. I wasn't even aware of the second week's sales. Also, I'd like to know how one finds GameStop's return figures (outside of anecdote).

OT: Nah, I'm fine with the $60 I paid for it. I still haven't completed the game, but it has, thus far, been the best title I've played all year (right next to Life Is Strange: Episode 1).

Value is in the eye of the beholder (yep, exactly like beauty), so if one feels he shouldn't have to pay $60 for a single player-only game, so be it. I'm from the 80's. These types of games were a dime-a-dozen, and many of them weren't very long, either. However, the prices were no different (in fact, games were once MORE than the $60 you pay today).

I can't speak for any other district outside of the one I work at (retired navy,working part time for the discount) but of all the AAA titles released on any of three consoles, the order got traded in faster than any. Within one week,we had 5-10 at any given time 5 days after. I worked the release morning, it sold well. When I went in after that we had more used than dying light,evolve,any Nintendo Wiiu release, halo mcc,nba15,evil within,sunset overdrive,Fifa,and many older games. It's not a testament to the quality of the game, but to the fact that it has little replay value. I can see this having a major drop in price sooner rather than later.

like I said this is only in my area, Milwaukee/northern Chicago. So it might not be true in other areas, but it sure seems like it.

@ Edward: Well, that was my point. Anecdote doesn't really dictate anything. My GameStop, for example, has had very few trade-ins, but quite a few had picked it up. This isn't really much difference to many other games that release here, either. If anything, Call of Duty is often the franchise with our highest trade-in rate.

We don't even know week 1 sales yet, nevermind week 2 sales dropping off lol, granted I think this game may suffer from pre owned purchases buy I still think life time sales will push 2 million which is good for a new ip.

Nah, the sales figures for it are still unknown.

What's enormous, is the amount of bullshit info on PlayStation exclusives that you regularly pull straight out of your ass; Now that's enormous !

Game was/is worth every penny!

Nah. People don't want you to enjoy a game that they don't enjoy, especially if it's on a system they don't own.

"Nah. People don't want you to enjoy a game that they don't enjoy, especially if it's on a system they don't own."

Funny considering most of the people complaining about this game in the Sony forums, and metacritic are PS4 gamers who own the game.

The conspiracy theories hurt your cause

Yeah, how dare you like something that other people don't.

There are alot of great games in PS4 including Knack, but the order? .... it just isnt one of them.

Explain why The Order doesn't qualify as a good game (Ooops...sorry you can't).

The Order's story and concept is intriguing and I can see this as a franchise that will get better with age if they can open the world more and make the Lycans a bit more vicious and more present in the next installment.

I've done a fair bit of it now and this is my opinion of it.

SOUND - Excellent sound quality from fx to the music score.

Animation - Feels more gears of war then Uncharted animation wise, feels a bit stiff in movement and camera, I think the camera could have done with being further back from the player.

The game needed more unique game-play. Kinda like where in Uncharted a Jeep ride/shooting made a difference and broke up game-play. Jet ski etc.

But overall I love the era, the surroundings, weapons, overall quality and the shooting. I just wish there was more monster types and more unique things happening.

Still only worth a rental.

Anyone know why we haven't heard anything about sales numbers? Prachter said he thought it would sell 10mm units. I would have thought they would be crowing about selling million by now given how they hyped up this game.

Wow, I feel bad for the early adopters

Nice game for the price!

Haters gonna hate I guess but I had no regrets buying it at launch. Not a perfect game by any means but a definite solid game that has me interested in a sequel kinda like the first Assassins Creed.

in the bargain bin already damn