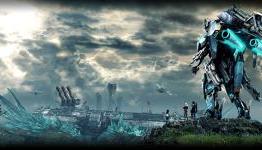 'Soul Voice'? Is that the main character? So does he speak a little in dialogues and cut-senses after all?

(Currently replaying the original XC, and I have a hard time to imagine how a silent protagonist could work, without compromising the story telling)

No.
As explained in the recent trailer [which you can watch subbed, at the exact time they talk about Soul Voice, for your convenience here: http://youtu.be/_kh5V73XpwY... ] is the system used in the game during battle to heal, amongst other effects, by using a timing-sensitive button press to respond to the call-outs of your team-mates.
A similar system exists in the first game, though, IIRC, it only affects your tension and the party gauge, instead of being your source of healing.

Also, as the video explains, Soul Voice can be customized to do different things, perhaps even to function differently.

You can even set up the instances in which Soul Voice can activate for your various characters, which will allow you to better control the flow of battle and how often you can use Soul Voice to heal or perform various other effects for you.
Of course, you'll want to practice the timing of the button press for Soul Voice to get the most use out of it, so since you're playing the first game you've got that opportunity.

Thx for the reply. Ok so 'Soul voice' does that.

I don't really watch any trailers anymore as I am terrible afraid of spoilers.

Is there any info on how story and cut-scene dialogues will be handled?

Kinda unrelated, but I wonder what I've been saying to get that many downvotes?

Or is that just coming from a bunch of people that are still salty at me for something I've said in the past?
If that's the case, drop the grudge, kids. It's unseemly to stalk me just to downvote everything I say.

Before I answer that last question of yours, I'll be blunt with you; the storyline, outside of the fact that Earth is destroyed in the very beginning of the game which leads up to where the game takes place, isn't spoiled in the trailers.
All of the trailers so far only detail things like the various areas you'll explore and the different game mechanics and factions present, so you can watch them without fear of having the storyline ruined for you.

I highly recommend doing so; they'll explain things far better than I ever could here.

Now as to your last question, I'm not sure what you mean.
The storyline will take place via normal cut-scenes and dialogue between the various characters; there aren't, as far as I know, going to be any QTE cut-scenes like in RE 6. [You won't need to "hammer the buttons and wiggle the sticks".XD]

If you're talking about whether or not the main character gets a voice during cut-scenes, that's something I can't answer with complete confidence.
From what little we've seen, it seems he doesn't talk during cut-scenes.
However, as I stated up above, we haven't been given enough storyline cut-scenes to judge whether or not he never talks period in them or not.

Of the very very few cut-scenes we've witnessed, none of them give any solid information pertaining to the deeper bits of the storyline of the game.
Just the beginning parts and a couple of miscellaneous cut-scenes are detailed.
In other words it's extremely spoiler-safe.

If you're worried about it feeling off, though, there are other games where the storyline and relationships between characters progress just fine even with a mute main character, through text options outside of cut-scenes that allow the player to direct things.

I do have some interesting information, though, concerning the personality of the avatar.

Thanks to a translation done by someone recently, it seems you'll have some way of affecting the personality of your player-made avatar, which will in turn affect the kinds of lines he/she says during the Soul Voice in battle.

Quote: "Soul Voice, as thoroughly introduced during the Battle Presentation, will allow for lively battles, expanding on Xenoblade.
It was hard work coming up with character-specific dialogue for the 20 avatar voices + the set sub-characters, in addition to the audio recording of all of it which was also an effort.
...Yes, the Soul Voice dialogue will vary depending on the personality of your avatar."

Loving the effort being put into the voices for this game.
It's gonna be great.

Can't decide what JRPG I'm anticipating more this year – Bloodbourne or Xenoblade Chronicles X or Persona 5. Dang it, such a great year for the genre.

I know, right?
I think we've also got KH III coming this year, and Bravely Second isn't far off.
I think there's a new Tales Of game in the works, too...
Then we've also got the indie side of things with games like Pier Solar and others like it...
2015 is looking like it might turn out to be a gold mine for RPG enthusiasts.

Bloodborne is more of an action game with RPG elements than a true JRPG. Which is why the Darksouls type of games get compared to Zelda's style, because I wouldn't consider Zelda games to be JRPG's either.

Forget Shulk, These 5 Xenoblade Characters Should Be in Smash Bros

Where Does Xenoblade go From Here?