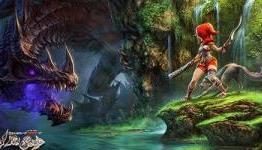 PSLS: Dragon Fin Soup is an upcoming PlayStation 4, PS Vita, PC, Mac, and Linux game being developed by Grimm Bros. It’s a dark and twisted game, taking influence from the original Grimm fairy tales, which are disturbing to say the least, yet it also is filled with a huge amount of humor.