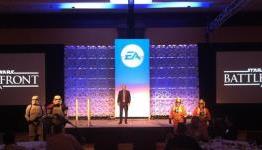 Forget about the Year of the Goat - 2015 is setting up to be the year of the Wookie. With Star Wars making its return to the silver screen in December, the hype train for DICE’s reboot of multiplayer shooter Star Wars Battlefront is getting ready to punch into hyperspace.

Adhttps://store.steampowered.com/app/1488200/Symphony_of_War_The_Nephilim_Saga/?utm_source=n4g&utm_medium=native&utm_campaign=sow_n4g_native&utm_content=png
- Comments (66)+ Comments (66)
TopNewestOldest
Expand all
The story is too old to be commented.

So let's see it

I dont think we'll have to wait til E3. I think they'll show it before then

All I need to know is if it's gonna be 3rd person. If they screw it up and make it first person only, I will be pissed.

With Amy Hennig on board I have very high expectations. :)

@jmd749 Amy Henning is working on the Visceral star wars game, not battlefront

Damn, a standing ovation. That sounds pretty damn promising. Unless EA charged a subscription fee for sitting on the chairs.

I cant wait till E3!

No amount of standing ovation will make me trust EA. Show it or shut up. Let the product speak.

it had a standing ovation because it was on ps4.

I agree, show or it didn't happen. If you have nothing important to provide us don't waste our time. Here's a nice downvote and dislike for trying to garner hits by using SW. Post the supposed video to redeem yourself!

NOT EVERYTHING IS CLASSIFIED NEWS

Well actually it did happen... but its up to EA to show the rest of the world

It's called marketing. They are building hype ... slowly. Just look at the posts. The attention got stirred up allready. You can bet that whatever they showed will "leak" soon. They will then feed some twitter post from a developer, some sreenshots here and there, another video, e3 reveal and so on. Same old, same old.

Let's just wait till it's done.

This was the first look for the journos, but industry platform holders saw the game for the first time in January. And IGN said that EA and Dice will be showing it to the media at GDC. Battlefield 4 was shown for the first time at GDC 2013... So even if you don't believe it doesn't change the fact that it happened.

If it looks as good as the trailer below and showed some good gameplay, I can see why it would get a standing ovation.

It will most likely get leaked before the E3 gets here, I'm sure. Just about everyone is looking forward to this game.

I can't wait to play this game early with my EA Access membership.

Does that mean that he has a tattoo of the game on his chest?

me too , not sure why people would disagree with your excitement to get your hands on it a bit early

5 days early access, but that's just an added benefit to EA Access as the vault alone is worth more then $200 and the 10%discount on other games on top of it it screams bargin

Thats 3 days you still have to wait....while theyre enjoying the game. You'll be here hating, like the good antifan that you are.

3 to 5 days more isn't killing anyone who've waited the 2 years of development to play it. He's not hating, he's just saying the wait isn't a big deal.

Hey Star Wars fans are pretty rabid. So are Battlefront fans. This is a pretty anticipated game and I would be happy to sign up just to play it early. Its at least an option for those who want to. That's not a horrible thing. Better than those jerks who are charging 60 bucks for early access beta codes online.

Cant wait to play this with my controller and use its touchpad for melee moves and the speaker for authenic movie communication coming out of the speaker on the controller.

I will also let my friends shareplay this game, thus they can try it before they buy it.

(If you are going to troll...always have a strong first statement)

"I will also let my friends shareplay this game, thus they can try it before they buy it."

Wouldn't it be cool if coop was available through shareplay?

That would be an awesome way to demo the game.

They got a standing ovation for showing DX12 footage. Not sure PS4 will be getting a "superior" version, but one can still dream.

Good we need to have beta testers, especially on EA games.

Really wanna see this footage. Hoping we don't have to wait all the way until E3 to see it!

This will be awesome on XBO. Stay tuned,

It'll be wonderful regardless of where it plays, if it lives up to the older titles, remember its EA. Always exercise caution to avoid disappointment.

My brutha I will buy a second titan if need be for this!

Eh for all we know EA surprised everyone with moneybags hidden under the seats. I'll keep my hype in check till the reveal is shown because its EA. Besides I'm sure it'll have wonder(ful**) premiums and overload of day 1 DLC ala Evolve.

It will have a premium service just like BF.

Now I'm curious. I'm sure EA is going to fuck it up like they always do.

So, did it get a standing ovation because it's awesome or because people really want this game to happen. It can be the latter.

It'll sell and people will go crazy for it and it's going to be a Star Wars skin on Battlefield all over again I'm sure. And I'm almost positive the DLC situation is going to be insane as well...

So what. Tough tities I want it. No one cares your winning in a corner while we are having fun.

I'm playin battlefront2 in 4k and love it.

Man, I would love to play that game in 4k! It would be so awesome to see all the low poly edges with no anti-aliasing and I'm sure it looks abysmally grand!

Good job for upscaling that, I seriously mean it. Not many people would do that and brag about it...

And you mean *whining. I mean, I am winning...but that's a different story.

They probably gave it the reception it got because it's a new battlefront, not because of the gameplay.

I have little faith in EA and DICE to make this true to the other 2 games.

Well BAH Humbug... jeeesssh... Let's not get excited about anything. I didn't really get into Battlefield till late. Doesn't mean it's a bad game.

It's being produced by the same developers who made Battlefield what it is today. For those of us that were huge into Battlefront almost a decade ago, you should understand why there's incredible caution and pessimism surrounding this game. EA/Dice's track record should be enough to explain why. But we also have the fear that the game we used to know and love will turn into nothing more than just a name to sell copies.

The Giant Bearded Face is right...

I understand the pessimists, but this game was a decade ago. I have and I used to play it as well. People online these days are always pessimists though and often times tend to hate perfectly good things in these comments for odd reasons. Some people are mad about BF4 servers and are lugging that angst with them still.

I am not defending these reasons. I am just trying to remain positive rather than burning or drowning the witch. After all the game got a standing ovation. I want to play a good game. Be it third person, first person or whatever.

A lot of this speculation should be toned down a bit. Its like watching a sequel to a movie that has been ten years apart. Odds are its never going to compare to the original. So expectations should be lowered automatically. Still if we are open to a new experience maybe it will be fun regardless.

I would be cheering if they paid me too.

Because everyone in attendance was paid off! Yay!

Imagine they offered all I attendance free copies of the game and free Xbox Ones. Bribery is not always in the form of money.

No no no.. MS was not involved. They supposedly pay for EVERYONES thoughts remember.

Yeah bribery isnt always in the form of money but it seems to be powered by your imagination in this case.

It was more a point making, I am not sure they paid anybody here, but EA is known to pay outlets and individuals to have "opinions" about their games. There is no way completely broken games like Medal of Honor would have such staunch support from group of individuals who also like to post stories here on N4G with the credit website as EA.com

Could be worse, could be being developed by Infinty Ward.

It's a Dice and EA game. I'm sure we have to wait till Q1 2016 to play this. Getting rid of the bugs is one thing and to have the servers stable to run the bloody game is another. Battlefield series is a good example on how EA was rushing Dice to make Battlefield 4 when the next-gen console was about to launch . Don't forget about EA's greed for money, this Battlefront is surely to be rushed and milked as they are trying to gain the hype from Star Wars EP7 as well. (Plenty of DLCs)

Don't get me wrong, I'm still getting it day 1. I'm just saying try to be a bit skeptical and lower the expectation. This is EA we're talking about. The only game in 2014 that is worthy of respect was Dragon Age Inquisition. But, that game was also tweaked to fill in their greed. (Microtransaction in multi-player)

Most publishers are doing this now and it's unacceptable. You buying (pre-ordering it even) encourages this behavior.

"... and they all jumped back to their seats when they heard about the DLC."

Dlc isn't a bad thing so long as the game is a complete game to begin with. Dice haven't failed before on that front (even if bf4 was broken it had enough conten, it will work like premium for that I imagine.)

I have high hopes for this game. I know it will be incredible. Disney will make sure of that. They spent a ton to get this franchise and I'm sure they are holding EAs feet to the fire. This was a big investment for them and they know its make or break. You dont go spending billions because youre stupid with money. Movie will rock. This game will rock. It better or EA will get a swift kick from any future projects. Disney will make sure of that. Im jazzed for all of this. Just hope JJ brings back the magic to Star Wars like he did Star Trek. Here's to a great Battlefront game!!!

Sigh... I do not know why they are doing this but I am looking forward to see what they do with Battlefront. I hope they don't screw it over.

"I find the lack of video....DISTURBING."

I find the lack of the lack of video disturbing. You would of thought someone got a cell video of it.

"...and introducing our new class changing spawn system, where users will be secretly and legally charged 99c per class change. This will revolutionize the industry and raise our profits more than ever..."

*Stockholders and publishers stand and applaud*

Doesn't matter if it gets a standing ovation. These are the same people that thought Bioshock Infinite was an amazing game with a profound story.

wth are you talking about?

The Star Wars: Battlefront Soundtracks are Getting an Official Release