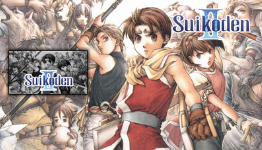 How fans can get Konami to re-release Suikoden II on U.S. PSN

Watching the stream and it brings back memories.

I am still waiting for Suikoden 1 in Europe.

Let's do it! I never played Suikoden, but I know lots of people want it, so let's all try to get konami to pay attention to this.

Fatty still has his copy (even wipe the Crisco off my hands before I touch it), but I'd buy it again in a strained heartbeat when my pacemaker activates.

I would just love Suikoden VI to be made .

I'll bite , but i'm getting fed up of "having to make" publisher notice on social networks that i want a game .

I'm ok for a few nice heartfelt and genuine initiative like Harada and xenoblade ....

But i'm tired by crap like what Konami and Square are pulling off here . You've had years of feedback , complaining , begging and questions about it , you do know if people want this , and most of all want new (TRUE) suikoden game .

Konami shouldnt even be wondering and fidgeting about Suikoden . Are they even remembered this gen for publishing anything else but Metal Gear , (mediocre) Silent hill games , a dwindling DDR , and (mostly mediocre) PES games ?

They are sitting on ips that could work , and not even really pushing new stuff forward .

Its especially galling with something like this (or all the countless games missing from Nintendo's virtual console). Slapping an image of a PS1 game on the PSN barely costs them any time, effort or money.

Any publisher or rights-holder who is just sitting on top of a pile of old games, especially classic games, without even trying to put them up for sale on a digital platform is just too blitheringly incompetent for words.

I don't see why Konami doesn't just green light a remake of Suikoden 1 and 2 with high-res sprites and some added features, when remakes are all the rage nowadays. At least release Suikoden 2 on PSN, doesn't make sense to release part 1 on PSN and not part 2.

the same reason they missed out on using Bloody Roar when even KOF came back in the mainstream gaming audience successfully .

They are run by monkeys .

Makes me mad and I'm sure many others like yourself on how Japanese developers are handling their most fan favorite franchises. Instead of continuing the franchises, remaking them, making spin-offs, etc. they tried to chase after successes of western developers.

One of the dumbest things I read once was how a Japanese developer wanted to make an RPG game with the pace of a Call of Duty game....WTF why?!

I want my Japanese games to be uniquely Japanese and not cater to what they think western gamers like. For example Resident Evil, why did the devs make Chris and the whole crew have biceps that looked like they belonged in a Gears of War game?

I hope they realize soon that gamers are wanting their Japanese games in ways that made them stand out on their own in the first place and release (or in this case not release games) just because they think games nowadays needs to be less Japanese and more like everything else to sell well.

I actually wouldn't mind a remake. I mean remake the first one as one awesome JRPG. Expand the storyline, make the castle more interactive. SO MANY OPTIONS!

Show Europe some love dammit! Not even got the first suikoden or even The legend of dragoon.

Any sane publisher would have put the entire Suikoden series on PSN YEARS AGO.

The fact that 8 years after PSN debuted, we are still waiting for Konami to make it happen, suggests a level of incompetence not seen since Atari's fall. And like Atari's fate, we will have to wait till they are bought out and new management makes sure the back catalog is making money. No amount of facebook posts is going to solve this problem.

Honestly, if it weren't for Kojima and the Metal Gear series, Konami would have gone under sometime in the early 2000's. I keep hoping he'll take his crew and move on. Konami doesn't deserve someone that talented.

They managed to let Igarashi and his brand of Castlevania go FFS , while failing to even cement the newest Lord of shadows universe .

I remember a friend saying that Kojima studios should just take over/purchase Konami as a whole , a few years back , around mgs4 and with a few Kojima interviews where he showed interest in reviving a few franchises (among those Silent hill) .

Now i'm not smiling at the propect and idea , and would be quite ok with it ... even if unlikely

I would be extremely content with just the digital release of the first three games in Europe. I mean the first two would probably look pretty good on Vita and the third has never seen the light of day in Europe.

Can konami just make Suikoden remaster collection from Suikoden 1,2,3,4,5,Tactics? Is it that expensive to do that?

Yeah, i didn't understand what is konami problem with Suikoden series. It's like suddenly the series became a cancer to them. And not just Suikoden, but classic series such as Contra, Gradius, Z.O.E, DDR, etc are in coma, except MGS, PES, and SH.

Now i'm worried that Konami will abandon Castlevania too, since LoS 2 not as successfull as the 1st one and Iga already left Konami >.<

its already ESRB rated why don't just release it..... I'm wondering if maybe they are waiting till psone classics arrive on PS4