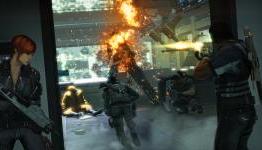 Fuse will continue in forms other than DLC.

Hmmmm browsing his little post on their site I can't help but laugh and nit pick at some of the sentences.

Really? I'm pretty sure Borderlands does it better

Obviously not very well since you seemed to give off the impression that everything was fine and nothing was wrong with it.

*** we continued to make adjustments to the game, adding more color; making sure the humor came through in emergent dialogue. ***

*** No, we didn’t make aesthetic changes because of a 12 year-old’s focus test comments ***

Oh yeah but you did listen to EA's focus testers after the Overstrike reveal.

*** We’ve already begun expanding what we’ve begun with Fuse. Right now as I write this we’re taking the core concepts behind Fuse and prototyping new stuff… ***

Until EA sees how crap the game has done and doesn't want to fund any more projects.

Oh Teddy, trying to sugarcoat this whole thing for yourself is making you look blind and silly. I really hope there will be no more FUSE games. I want them to realise that going multiplatform doesn't always get yourself loads of money. I just can't believe they refused to be bought buy Sony because they wanted their "freedom" and then they go with EA.

It's actually not that great, people are just thinking it is because they play with friends, EVERY game is better when friends are there.

"Really? I'm pretty sure Borderlands does it better "

Well Borderland is a FPS not TPS.

I was kind of thinking back for some reason when Borderlands was a TPS during it's development before the cell shaded change...anyway they still have the main co-op shooter focused.

Im guessing the next game will be canceled. Fuse is not getting good reviews and I doubt it sells well. I like Insomniac but this game doesn't seem to great.

I actually feel bad for them. But oh well I guess things like this have to happen in order for them to open their eyes.

As a third person shooter is just plain alright, but they better move quick because other developers are way ahead of them.

I watch the review for fuse on ign and the whole time i thought of brute force on xbox.

Wow I remember that game. I played it for like 2 hours and then never played it again...and that was getting it for free.

Yes it was bad. I remember that game being sooo hyped up. But this game reminds me if it.

fun fact: work at kmart and the game still rings up as OVERSTRIKE lol

Sad that great developers decided to get together with EA and effectively lose all of their identity with an uninspired, stock-standard, copy-paste serving of modern industry "win" formula. Clearly, the "winning" formula isn't winning so much anymore.

From the guys who brought Resistance and Ratchet and Clank, this is sad indeed.

I wonder how much an influence Ea had on them. They prob had a better game and Ea prob was like what that wont sell make it more like gears.

this game looks bad. i have no interest in it. insomniac need to just stick with resistance, seems its all theyre good at these days.

With mediocre reviews and the game being only 5hrs or so long why is there DLC promos hitting for this game already? Screams of money grab before this title falls to the forgotten pile.

Please just finish and move on. Take note of the fact that this was a failure. Move on to other bigger and BETTER projects. Sonys new machine is ripe for new Ratchet, and Resistance content. Heck maybe even a new IP.

Just no more FUSE. It sucks. Listen to that voice in your head. It is telling you to stop.

Please Sony, talk to Insomniac on Resistance 4 on the PS4.

The game nobody wanted gets a sequal.
Are they drinking the same cool-aid as the Final Fantasy devs?

Get Ratchet back on track Ted, & stick where you belong. PS consoles are where you belong, but you got greedy....you should have sold to Sony...that's the bottom line, I mean they were always so supportive of whatever you did, ya fools.
But, Sony suffered horribly financially with PS3, & when Insomniac wouldn't sell, well, there was no more reason for Sony to bother helping them out with marketing & such, as they had studios that they did actually own, that were struggling & needed help, as shown by Zippers demise amongst others, as well Lightbox Interactive & others being delegated to making mobile games....I mean, Twisted Metal was unbelievable, best in series, & one of the best online competitive games this gen. & it sold abysmally compared to what it deserved, same with Starhawk.