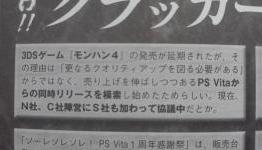 "Monster Hunter 4 was recently delayed in Japan. Originally to be released in March, it has since been pushed back to the summer of this year.

Now Japanese sources point towards a simultaneous release of the game for both the 3DS and the PlayStation Vita as being the cause of the delay."

Adhttps://store.steampowered.com/app/1488200/Symphony_of_War_The_Nephilim_Saga/?utm_source=n4g&utm_medium=native&utm_campaign=sow_n4g_native&utm_content=png
- Comments (57)+ Comments (57)
TopNewestOldest
Expand all
The story is too old to be commented.

Isn't Monster Hunter 4 a Nintendo exclusive? Do you know what the magazine article translated into English means?

It isn't announced for another system yet, however Monster Hunter as a brand isn't exclusive. Maybe it will come to Vita. They had a Vita remaster for the last one at the TGS when NGP was announced. I do hope for this though. The Vita could really use this in a bundle, especially in Japan.

if i was Capcom I would releas it for the PSP as well, it is where the biggest MH fanbase is, and an HD edition for the Vita like Namco is doing with God Eater 2, if it is out for the PSP, PSVita and 3DS it will be the best selling MH yet.

Monster Hunter was huge on the PSP in Japan, so it would make sense that Capcom would return the favor & bring it to the Vita.

Also if Soul Sacrifice is a big success, then it could be a turning point for the PSV in it's home market.

^
I think if Sony wants to sell more vitas, they shouldn't let the MH team release it on PSP. It's pretty clear more vitas need to be picked up, so having the game for vita and 3DS really opens up for more vita sales. Exciting news though; whatever gets more vitas off shelves is fine with me!

Hopefully the game comes quite some time after SS.

Sony needs to make certain that game establish itself as a fail safe against a 3ds situation.
If this is true that's gonna be a great turning point in Vita sales.

There is no point in doing it, the Whole MH fanbase moved to 3DS now, best result it could have is bump in sales and that's in Japan alone, well IF this happen, which is not, because I already explain why :P

I thought Nintendo were publishing it. Like they did with Monster Hunter 3.

Publishing a title means nothing. IP rights are everything. We had several third party titles this gen published by one hardware company only to see those same games come to another platform.

It MAY be in a contract so it will just get on Vita later anyway. If Nintendo have a contract on it it will be timed. If not it can get on there day and date.

Either way a Monster Hunter game will get on Vita eventually anyway.

Just like how MH 3 Was only coming out on the WII.
Come on man you know better then this they just change the name a little put some extra features in it and call it MH4g edition just like they did on the psp.

i remember there was a monster hunter for psp

any news on RE Revelations?

Though I have a hard time believing that. Awesome if true (both 3DS and Vita owners get to play the game).

It would be good for Vita owners. HOWEVER , What about all the trailers stating ''exclusively on Nintendo 3DS'' and Capcop clearly stating it's a 3DS exclusive.

I don't believe it. I will believe it if I see it.

Even if it does come to vita , the 3DS version will destroy the sales of the vita version anyway :P

we're talking about capcom here, i don't think this would be any problem for them...

A bump in sales for a week, or even a month at most , honestly, there is nothing big MH4 will do for Vita now that the franchise and the fanbase moved to 3DS...

I know the graphics and online would be epic for vita. Plus trophies , party chat, and cross game music. The possibilities on vita are huge.

Had to end it with a fanboy troll comment didn't you.

Anyway I hope this is true as I enjoyed Monster Hunter Freedom Unite on the PSP and hopefully it will shift a few more Vita's, I wouldn't bet on it though since Capcom seem to be favouring Nintendo when it comes to Monster Hunter and most of the fans would have bought a 3DS or Wii to play these games already. Either way we still have Soul Sacrifice, God Eater 2 and Phantasy Star online 2 to look forward too on the Vita. Also I haven't put Ragnarok Odyssey down since christmas.

Would be great to have this game on PS VITA since Monster Hunter was the reason i have bought PSP (playing at university during boring lectures).
I'm being moderately optimistic, but I have thought that MH4 is a exclusive for 3DS.
If, by any chance it comes out on VITA, it would be cool for it to look similiar to soul sacrifice and not to be a direct port from 3DS with slightly better graphics.

How about Phantasy Star Online 2?

I doubt this very much.....if anything it will show up on Wii-U eventually.

And all these disagrees fail to realize that Monster Hunter 3 Ultimate is on both Wii-U and 3DS ??? Do you honestly think if they were capable of taking Monster Hunter Tri for Wii and improving it to the U and 3DS, that they wont do the same with 4 and upgrade it for U?

A clearly reliable Google translation of the Japanese site has this:

'3DS "Monster Hunter 4" [rumour] When did postponed, w, because she apparently began to explore the simultaneous release of the PSVita version, not because of quality up'

The reasoning for the release delay for 3DS's MH4, is not for 'the purpose of upping the quality', but to prep for a simultaneous release for the PS Vita. As of now, Nintendo (N company), Capcom (C company) and Sony (S company) have not commented.

Only rumor for vita which i hope is true. Games like SS and MH are sure to be system sellers.

and this is why capcom is wary to release MH games on consoles (aside from nintendo, because MH tri sold very well).

One, the game was released on xbox 360. It doesnt do well at all in country which is dominated by both Sony and Nintendo consoles. Two, this being released on ps vita could help PSP owners in Japan migrate faster to it. That and SS.

hmmm, i thought capcom had released monhun frontier on xbox on the US/UK, but it seems i am wrong...

...why capcom aways try to stay away the from the good decisions?

that'b great! MH3 raised PSP sales for over a year, MH4 on vita would give the same effect.
Would be nice to see third party support Vita

If this is true I hope Sony will confirm this ASAP as news like MH coming to Vita will generate more interest from 3rd party devs.

With Soul Sacrifice and Monster Hunter I Think that VITA will reborn on Japan.

Let's hope this is true. I'm really surprised Sony didn't lock down a MH title out of the gate. That was the one franchise I was almost positive would be out within the first year. Then, after seeing the news of Nintendo getting multiple games, it made my soul break like a Wyvern egg being carried by a newbie.

I checked out the source and it indeed says that N company, C company and S company (the latter two especially) are negotiating. It was interesting that C company was labeled as negotiating at the "enemy camp" (direct translation).

Pays off being fluent in Japanese! (finally I could boast off! :)

I wish Sony had their best selling PSP series on Vita, Mon Han (the way Japanese say it) screams PSP vita. It's so much about control and that second stick would make it a perfect fit. Also, it's about graphics and the sound effects. This is where Vita excels compared to 3DS (although I do like 3DS in it's own way)

Most of all Mon Han to me represented the feeling of being out there in the wild assuming a hunter's role and trying to complete those quests. 2nd G especially stole my heart and I put 130 hours in it, every morning playing it on the train to work in Tokyo.

Those were the days.

Capcom straight up said they will not make it for the PS Vita, they showed nothing but laziness when asked if they ever would saying nothing but "The 3DS was made first so MH4 will stay on the 3DS" along those lines.

If this is true though more power to the Vita but let's face it we know how Capcom is these days and they aren't putting out Monster Hunter like they used to across all platforms.

If so it will be another great year for the PS Vita. I'll grab Soul Sacrifice, Dead or Alive 5+ and Monster Hunter 4 if that is the case.. Hopefully PSO 2 is still coming out on the Vita as well.

Oh yea and God Eater 2, the Vita is gonna have tons of monster hunting games. I wish Lord of Apocalypse would have been localized also.

Back in 2008, Capcom did promise all future major releases would be multiformat. Just depends which bit of Capcom said that I guess.

Please let this be true and if so, don't make it a crappy port. At least improve the visuals because I'm not really liking the way the game looks on the 3DS.

If true finally...Hopefully they can get squarenix to release ffx shortly after; that would be killer when added to soulsacrifice,killzone mercenary,warriors lair and bend studios new ip.

All the vita would then need is an official price drop and include a memory card in every box even if its just a 4gb card at that.

now this is what the CEO is talking about. "Sony's comeback"

This would be such a big break for the psvita! I love mine and it saddens me that it isn't performing so hot atm

Well they did sell their New York HQ. lol

hopefully this is true get to use the hook finger again!. 1 of the reasons i bought a vita was for MH

If this is true than i hope it is not just a port of the 3DS version. We all know the graphical & performance ability of the Vita is much more capable than the 3DS so a port will defeat the purpose of having a Monster Hunter game take advantage of the hardware.

Or better yet maybe even our own Vita version later on down the line.. MH5, I can dream.

Agree 0Disagree 0
▼✖-+
SPAMInappropriate
Show all comments (57)
The story is too old to be commented.
60°