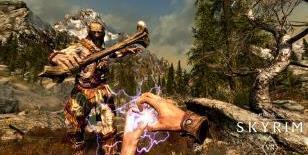 Will Bethesda Remain A Leader In VR After The Microsoft Purchase?

During the new age of VR first kickstarted by Oculus (no pun intended) and followed soon after by Valve and PSVR Bethesda was one of the first to show a commitment to the new medium. First with ports of big games such as Fallout 4 and Skyrim to VR. These big games gave us a taste of what a AAA game could look like in VR even if they weren't built from the ground up with VR in mind.

Bethesda continued their support with DOOM VFR and Wolfenstein: Cyberpilot. Brand new entries from existing franchises built from the ground up for VR support. These titles showed a much deeper commitment to the medium as extensive resources were devoted to games only playable in VR. Prey: Typhon Hunter was also released by Bethesda as an expansion to Prey: Mooncrash fully playable in VR.

After the Microsoft acquisition there has been silence from Bethesda about VR in their upcoming games. Starfield seems like a perfect opportunity to launch a new IP with VR included from the beginning but we have seen no hint of it yet. Microsoft has been notoriously skeptical of VR and have only dipped their toes into AR on PC with nothing for consoles. Is it that VR isn't compatible with the streaming via Gamepass future they envision for gaming or do they truly not think the hardware is ready? Only they can say. Will Microsoft allow Bethesda to pursue VR gaming when it is niche and not compatible with streaming? Again we must wait for the answers there as well.

VR to my mind is the future of AAA gaming. Once you have had the experience of being inside a game world instead of simply viewing it from outside you know "flat" gaming can never compare to the sense of presence you get from VR. Will Bethesda be a part of that future or a footnote in its history? Only time will tell.

I think so. Why wouldn’t they get in on some of the Vr action on pc? I just think they don’t want to mess with hardware.

I think they might be tempted to leave VR to modders on PC.

Even with Microsoft owning Bethseda, I don't think this'll change the way they will resell the same game again and again and again on every platform from PC to your toaster. Even with added VR content.

Well with Microsofts new slogan play anywhere... VR doesn't fit in with that. They had no interest in VR before.

MS as an organisation has invested millions in VR and MR and still does. They have just decided it isn't ready for mass market console gamers.

If you are a pc gamer the landscape is very different

Play anywhere.. but not in VR would be a more accurate slogan. I hope Microsoft do look to bring a mass market VR device, with what they are currently doing and offering cross platform experiences between xbox and PC, they've laid down a great foundation for entering the VR market.

Hope not vr still isn’t good enough for me anyways

Bethesda has been silence regarding VR since the acqusition you say, but I'd say it's been quiet regarding anything from Bethesda.
I might be wrong as I ain't following them closely, but did they show or talk about anything last 2 years?

Just Starfield and some expansions for Fallout 76.

But this vr was on nexusmods fanmade?

Deadloop and Ghostwire Tokyo are new titles from Zenimax. Starfield is coming this year and is a very huge game.

Yeah, I don't have much faith in anything that gets under the MS umbrella. MS doesn't function well outside of a monopoly, something they probably are aware of, hence the acquisitions.

From the same people that said that MS will sell the XBOX Brand because they didn't believe in the videogame industry.... look now.

I can’t find that source.

I agree. They have set a precedent that Sony need to follow and we're starting to see this now. Microsoft aren't interested in competing, they want to own and control the industry. I don't have a lot of excitement for the future of th games industry as a whole tbh.

Honestly just make the series x or s compatible with any 3rd party Pc headset and or the oculus that has inside out tracking.. no cameras or sensors bs..so one wire in the front and done and no hardware needed from Microsoft at all ..though I don't think series x has a USB c port

You don’t need usb-c for oculus link. USB 3.2 does the trick.

Doesn't fill me with hope, however if VR does go mainstream I'm sure he'll bust out the checkbook again and claim they do VR better than anyone else.

My buddy drinks bourbon, he’s not asking for beer, but if he wants whisky I’m sure I’ll bust out the checkbook…

You're buddy will want beer when the quality of beer continues to increase and he sees others enjoying it.

Interestingly they are still releasing psvr games after the buy-out.
Doom 3 VR was released on psvr early in the year.

That was just days after the deal was finalized though.

They have invested heavily in VR / AR / MR to the point of winning a 22 billion dollar military contract.

Yeah but that's mostly ar and non gaming applications VR and AR are totally different types of Technologies.
Ar is extremely cool however and could have some awesome games but it's still a long time from coming to everyday consumers.

They also invested heavily into VR research. This is MS a multi trillion dollar tech company. You think they let VR pass them by?

I have tested Hololens for the last 4 years and... it is a 4000$ toy, nothing Sony, Facebook and others should care about.

@Gunstar and have zero games or headsets to show for it

Bullcrap. MS have invested millions into VR AR and MR.

Do some research before saying silly things

Hard to say knowing Microsoft's subscription plans for gaming. But it wouldn't be unusual for them to block any future games in VR or help their competitors. They didn't just possibly lock out flat game franchises to keep off PlayStation, it includes VR games.

I doubt Bethesda will be working on any VR titles until their other flat game titles are finished. If ever. But, Microsoft does have enough developers now that could help launch an Xbox VR headset. But as I said, Microsoft doesn't believe VR fits into their subscription for gaming strategy at this time.

Personally, I don't think that Microsoft will push their company into supporting new tech of a competitor when they themselves are not in that market.

It's a shame but from a business standpoint, I can't see it

Surprised no one mentioned the Kinect, that debacle probably made them gun shy to try another hardware add on.

The Kinect sold really well breaking records for fastest sales but had limited software, devs couldn’t afford second teams. When devs were dedicated to making a game and spent the resources to pay 25 people for a year then the game could only be sold to 30% of the Xbox players that had Kinect.

Or the same devs could make a game that 3x the amount could potentially buy. What would you do?

Same problem with vr. You need dedicated teams that could have a better return on investment.

I think it is a two edged sword, they can stop their contents from going to other platforms, hoping to force people to buy into their ecosystem, but if that doesn't work out then they will become more even irrelevant in the VR space if VR does indeed raise up this gen.

Same for the CoD franchise, it is a popular name and has a lot of power, but if they stop it from going to other platforms, it can either benefits themselves greatly, or to risk another cross platforms FPS to raise up and take a bit chunk of the pie.

Microsoft has already stated there lack of interest in vr. If anything Bethesda will have less of a presence in the vr space now.

When were they ever leaders in VR? Everybody unanimously criticises their VR ports

For someone who plays a lot of VR I really disagree with the statement that they are a leader in VR, they ported a lot of their games over to VR but they were so low effort and poor examples that the best way to describe their contribution to VR is a leech rather than a leader

They’re a big name in VR but not a leader imo . They just port shit to VR

@OP you are specifically talking console VR and ignore Microsoft's Windows Mixed Reality platform. Talking specifically about Bethesda, I see no reason why they can't make VR games based on upcoming releases regardless of who they are owned by. You can still play VR titles via Gamepass for PC btw.

I think calling them a leader in vr is up for debate.