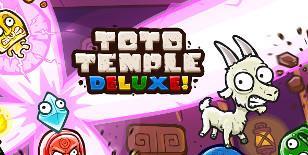 Fun. Friends. Frantic. These three F words will guide your experience through the hilarious and joyfully insane game known as Toto Temple Deluxe.

Created by Juicy Beast. Toto Temple Deluxe is a 2D local multiplayer game in which you use a versatile moveset to fend off up to 3 other players, while trying to maintain control of...a goat.

This goat is the lifeblood of how you win. Hold the goat to get more points, and simply hold it for as long as possible to win. Sounds simple, right? Well, it is. And that's where the charm really comes in. It's easy enough for anyone to pick up and have fun. If you have friends over, this is the kind of game you'd want to pop in. Grab a beer (or juice if you're not old enough), sit back, and have some laughs. If you are familiar with games like Tower Fall, you can expect to find the same fun here.

Now, every player has a set of moves. You can jump around as you'd expect, but you also have a nice dash move, that lets you jet across a level in one direction. Scattered across the level are coins of various value that help you boost your score, but really, it's the goat that spits out the most points, and guarantees victory.

Using these dash moves and jumps, you can steal the coveted goat by ramming into the goat carrier (get it? Ram?). From there on, your movements are a lot faster, though you cannot dash. These simple balance mechanic makes the game a lot of fun, as on one hand, you can dash around to steal the goat, while the goat carrier cannot himself have a runaway win. In fact, the chaos here comes from chasing the goat carrier, dodging obstacles, and collecting coin.

The gameplay here is buttery smooth and perfect. You can expect to jump with great precision, and dash across the screen instantly. The levels themselves are well designed, bright and colourful like the rest of the game, yet full of traps and obstacles to overcome. Some levels will trap you in a box, forcing you to waste precious time away from the goat (alternatively you can stay holed up in the trap if you carry the goat). Levels are also very varied, ranging from beautiful aquatic maps, and of course, temples.

While playing with friends is the real blast, Toto Temple Deluxe features CPU players that are very well competent and will give you a great run for your money.

Modes in Toto Temple Deluxe consist of a free for all, a team battle mode, and if you're feeling extra chaotic, an elimination mode where the goat becomes a bomb. This adds some nice variety to the gameplay, as you go from maddeningly ramming the goat carrier to carefully trying to escape his fiery wrath.

The last thing that you must absolutely know about Toto Temple Deluxe is also the first thing you will notice: the presentation value is so beautifully well done. Rich and vibrant with colour, bustling with a catchy and happy tune, and featuring an ingenious interface that has you using your in-game character to navigate the settings, everything comes together in such a way that reminds you that this is a video game, and that video games are meant to be fun!

Toto Temple Deluxe comes out for the WiiU, PS4, Xbox One, and Steam. If you are looking to play something that is casual enough to pick up, but has some great fun and good depth for advanced players (mastering the platforming and overcoming level obstacles adds some well needed experience to master), Toto Temple Deluxe is the game for you. It's fun, it's crazy, and you'll undoubtedly be yelling

Changed from Pending to Approved
Community2618d ago
- Comments (34)+ Comments (34)
TopNewestOldest
Expand all
The story is too old to be commented.

Looking forward to trying this out.

This looks like a great party game because it's so ridiculous.

Haha get the goat!

I love how the game revolves around goats! lol

Seems like it will be a great coop game!

Too bad that this title is not available for ps vita - I would happily played.

Yep this is another one that would suit Vita nicely, maybe later? Still it definitely looks fun, even if just on short bursts.

I was telling myself the same thing, great game on the go and with friends too..it's on the ps4, so maybe it works w remote play.

Can't wait to try this game out

Lol really see myself and friends playing this and yellimg at each other! Can't wait!

Back to local multiplayer. Awesome.

Not my kinda game but could be fun with friends. If the price is right I might aswell buy this.

i gotta try this

i think it's looking great !

Looks like a great game to play with friends.

It looks really fun local multiplayer game! I really like that it is very colorful game and also a little silly :)

The trailer showed stages had interesting mechanics, and these screenshots show there are quite a few stages. What else could you ask for ?

Looks like it came out of an arcade machine with high resolution! Love it!

Can't wait to try this game out! The different levels look pretty interesting.

Sounds like an awesome party game. I think the team mode would be great fun, as would the the whole goat-being-a-bomb mode :D

I wouldn't recommend holding goats in real life...just trust me

Really like the variety and design of the levels. Glad that you can play against bots as well.

Gives me a #IDARB vibe except not ball-in-goal oriented but capture-goat oriented. A simplistic, yet polished (by the sound of it) party game for buds to play when they're in the mood for local MP.

"Get the goat" that's funny.

Agree 0Disagree 0
▼✖-+
SPAMInappropriate
Show all comments (34)
The story is too old to be commented.
40°Fresh

The sci-fi MMORPG “Dual Universe” is now available via Steam, GeForce NOW, and the game's homepage