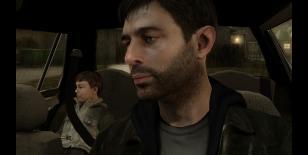 Obviously, at the very beginning, everything is simple. The first movie ever documented was of a man sneezing. The first stories were drawings of men hunting animals on cave walls. And people start out as a single, simple cell. This immaturity and simpleness is also true with video games. From the simplistic beginnings of Pong sprung an entire industry devoted to making games as intricate and realistic as possible. Games today are more believable and realistic than ever. Developers continue to break boundaries in what video games can do, both with story telling and graphical prowess. While some games are still raw and simple, developers should strive to bring a new level of realism into their games because the closer we can get video games to reality, the more we can understand ourselves.

Video game 'realism', in every sense of the word, has come a long way since the days of quarter-fed arcade machines. High-powered PC's can produce cutting edge graphics that deliver complete immersion into a gaming world. Polygons upon polygons are being rendered; providing uncanny resemblance to the real world. Games like Battlefield 3 and Crysis 3, when put in a powerful enough rig, look absolutely photo-realistic. Even consoles are pushing the limits of what we expect from games. And with the next generation of consoles just around the bend, the graphical power is sure to get even better. Graphical immersion is, however, just a small part of what makes a game feel like a real experience.

Obviously, the experience is real for people; we're not imagining playing these games. Games no longer are confined to simple mechanics of go here, perform this, achieve that. Now, more often than not, games have stories. These stories can range from action-thriller, to drama, to horror. Games like Heavy Rain are almost purely story driven and use very little mechanics. The realism of games like Heavy Rain, both graphically and emotionally, are startling. As gamers we become attached to characters, and we care about what happens to them. This relationship that gamers started having with characters didn't really happen until games got big graphical boosts and story makeovers. Original games like The Legend of Zelda and Final Fantasy gave the gamer something to fight for, and a reason to push forward. The natural progression of the industry, and technology as a whole, has made these stories more believable. And the more realistic they become, the greater investment gamers are going to put into them.

It's important that gamers invest not only their money, but their time, into the games that they play. Even games as mechanically simple as Super Meat Boy have some sort of story that the player can relate to. Making connections with people and objects is possibly the biggest part of being a human. When we're infants, we connect with our parents. But along with our human connections, we form a bond with the toys and blankets given to us; these things bring us comfort. That sense of connection never goes away with age, we still get attached to our possessions. Games that fail to capture the players interest, and leave them without any afterthought, are hardly spectacular. But a game that is realistic and reflects the human condition, forms a bond with its' players and is something special. These games are forever remembered as masterpieces.

All video game developers should attempt to make their games, in some form or another, realistic. They may choose to go down the path of cutting edge technology that produces a photo-realistic experience. Maybe create a deep and enthralling story that gets the player emotionally invested. Or maybe they choose to reflect the human condition back onto the player, forcing them to see their own strengths and weaknesses. All of these things generate games that not only immerse the player into the worlds fiction, but make that fiction seem like reality. Who knows, maybe a game will come along that delivers all of these things, and completely take the gaming world by surprise.

I agree to an extent with what you're saying. Realism in games, such as physics and some story aspects are okay with me. Delve too deep into realism and you get a simulator. IMO, realism isn't completely needed in games for people to have fun and be immersed in it. People delve into the world of Pokemon just as much as Skyrim. People love Mario and Sonic and those characters hardly have any realistic emotional stories. Then there's Journey which wasn't super realistic, yet brought out way more emotion than Heavy Rain did.

I just don't think that all games should aim to be as realistic as possible. I play games to escape my own life, something I'm sure many gamers do. I'd just rather explore the fantasy worlds of Pokemon or Ni no Kuni than spend my days in the world of Heavy Rain or Dead Island. You don't need to have adult themes or realistic scenarios to make an engaging story for people to be immersed in. Look at how many people fell in love with The Walking Dead Telltale game. A cell-shaded/Comic styled zombie game based on a comic/TV show. Despite that game having the same issues as Heavy Rain, it was rated much higher.

It's a kind of Yin/Yang of gaming. From what I can tell, it's mostly western games that aim for realism. Eastern games can have have realistic looking characters, but there are usually things that make that game unrealistic. Resident evil has realistic looking characters, but the monsters and decepticons of RE6 makes it unrealistic. Metal Gear is realistic...until you fight the crazy bosses. Dark souls is very western in design, but the bosses would be considers an unrealistic element to some people.

It's these unrealistic elements that make games fun, IMO. If God of War suddenly went for realism, boss battles wouldn't be in the game and Kratos would have a stamina bar...and maybe a hunger bar...and a wound system...and other tedious things which would only hurt the game. God of war and the new DMC are good examples of unrealistic western games with a semi-realistic art style.

Realism is just an element, not a necessity, in making a game. People love unrealistic games just as much as realistic ones and it's only an opinion as to which is better. I preferred the story and world of Xenoblade than the story and dreaded world of Dishonored. I'd rather be in the war world of Valkyria Chronicles than Call of Duty/Battlefield/ Medal of Honor. That's my opinion and preference.

I completely understand what you're saying. What I tried to touch on near the end of the blog was that games need only have some realistic elements in them. Ni no Kuni might be almost all fantasy, but it has that human element. Oliver is a boy, with a mother, and emotions. It's those things that really boost the connection players make with the game.

Same thing with God of War. Although the majority of the story is completely fiction, its' premise is based on human emotions. Kratos' family died by his own hands, he's betrayed by the Gods, and he seeks vengeance for their betrayal. These emotions draw the player in, and are realistic to us; even though the monsters you face on the way are complete fantasy.

The worlds of Battlefield and Call of Duty might have much less interesting worlds as Valkyria Chronicles and Pokemon, but the realism that draws me towards games like that are the visuals. When I first saw Battlefield 3 on a high-end PC, it blew me away.

I tried to briefly touch base on different kinds of realism, and how they all contribute to the overall experience of gaming, if that makes sense.

It is difficult to attain a realistic game through the story because it has to share the spotlight with the gameplay mechanics.

Uncharted is a game that demonstrates the contrast between the two elements. In UC2, you have to escort Jeff, the cameraman that gets wounded by a bullet, and while you're escorting him, you can get repeatedly shot by enemy henchmen and he just tanks it. All the believable dialogue and animation clash with the fact that a guy can tank bullets in gameplay, but collapses when hit in a cutscene.

... and this problem exists in almost every game. We've grown to accept it, but it still is a barrier in making a believable non-scifi plot. You either script everything out but limit the gameplay (such as HeavyRain/TWD), or sacrifice the realism.
Similarly, photorealism also has issues because, if you can escape the uncanny valley, you end up with realistic visuals with unrealistic "game-like" behaviour.

I do like the thought of games reflecting the human condition. However, I'm not sure if I would call that realism. I think you want games to mature and add layers to the experience rather than be realistic. (Unless if your definition of 'realism' differs from mine)

Very nice read. There are many different ways of capturing realism but in video games, it's virtually impossible for a game to be completely realistic and still be enjoyable, in my opinion. It would be completely daunting if you're trying to goof off in Grand Theft Auto and a single gunshot to the leg would impede your movements. In some aspects, I can see it working, but to an extent.

authenticity is the better word to describe it not realism.