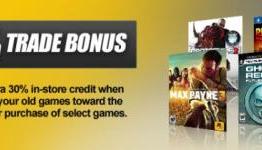 Used games are a contentious issue for almost everyone. Gamers loathe seeing their trade-ins being resold for several times what they received, but find it hard to pass up a new title for $10 off the retail price, or a bargain bin where some rare gem might be hiding between copies of Gun and things with “Lego” in the title. Likewise, developers and publishers resent the used market for cutting into their sales, but grudgingly allow it because they need stores to get new games and consoles to market. The shops that make huge profits on used games are the only ones not conflicted over them; their only major concern is protecting such a lucrative revenue stream from attack.

used games are never going away, especially with this economy.

Oh god, please don't tell the big corporations that. They think they can kill used game market with online passes.

there out of it.

Or by attaching the serial number of the game to your harddrive. I really hope that never happens.

We love it when we don't want to give money to publishers and then we hate it when devs do deserve the money...

I personally am in favour of the second hand market because I can get games for a cheaper price and sell games I bought and don't like or want anymore and use the money to go towards another game :)

I've mentioned in more detail on previous articles of this nature that used games are a main ingredient in keeping the industry healthy, so why fight it?

Instead of complaining all the time, why don't these Publishers and Developers make games that are deemed worthy of the 'new' price tag. Or they could use the old saying "If you can't beat 'em, join 'em", put all differences aside, create an alliance and build a network of stores akin to GAME and Gamestop, and enjoy the benefits themselves.

There are a couple problems with this:

1) Gamestop and every other used game store would NEVER directly network with Publishers... as this would be counter-productive to GameStop ect. Not to mention most of the suits are way too greedy for it.

2) IF publishers were able to directly network with said stores, it would not last because people would bitch and complain about prices being to high; then the industry would be in even more.

It was merely a passing thought, besides, the greediest of Publishers are going to shoot themselves in the foot whatever they choose to do.

Make a good game and you wont need to worry about used games, I still hold my PS1 classics because they are great.

While we're at it, why don't we advocate for ending used car sales and used home sales? That's smart, right? Every company should be expected to only sell new things. I wonder how that would turn out? Gamers lack perspective on what they're asking when they say "end used sales".

Games are simply too expensive at launch nowadays. If you are trying to charge £40-50 for a game, then the average gamer who is also having to contend with rising inflation and lower wages or having a job in the first place, isn't likely to be able to afford to buy many of these games.

I would resolve the issue by charging a flat fee every month of say £50, and that fee will allow a gamer to download x amount of games each month onto their chosen console.

Article said: "Used games are a contentious issue for almost everyone."

You know, up until like maybe a year ago, it never was before. I never remember hearing anyone talk about this at all, in a decade and a half of following game journalism.

This kind of came out of nowhere.

So sick of the media making Gamestop the evil face of used games. Developers and publishers don't even want you playing "your" game on your second console. That's how bad things have gotten. No one brings up the competitive prices for used games being sold on Amazon. No one brings up the fact that you can't take "your" game over to a friends house and play the whole game. No one mentions the fact that you have every right to sell "your" game to GS, Best Buy, or some random guy on the net.

It's the very reason why the industry wants to go download only. Of course, the media always makes Steam the prime example of how going digital could work, but never talk about the shit platforms like Origin and GFWL that never have sales and will rape you for full price for at least a year.

That's the industries wet dream. Take away your right to buy/rent/trade. Stop making excuses for these so called "starving" devs and greedy publishers.

And the used car analogy was misleading on two fronts. The day you drive that new car off the lot, it's consider "used". Obviously, if you were to buy a car with 200k miles on it, you'd be assuming a huge risk. If you go out and buy a 2011 used vehicle, there's significantly less risk and you're essentially getting a new car for much less money and whether you buy new or used, proper maintenance will get you a few hundred thousand miles out of that vehicle. With games, pubs want the consumer to assume ALL risk, so if their game is shit, you're stuck with it. Duke Numkem is a prime example of why used games can never die. Why should the consumer eat that bullet?

Buying a used game is exactly like buying anything else used. The only difference is, media from other mediums generally support the consumer instead. Car manufactures can't double dip on a single product, so why should publishers? Giving pubs a cut out of the used game market is nothing but legal extortion. Charging $10 for online passes IS extortion. The person that bought that game new is no longer clogging up servers and they've sold the right to use that server to someone else. Why must the next dude in line pay for something that's already been paid for?

Bleh...whatever. Hip hop is dead and so is gaming...

knifefight you are actually quite right. it wasn't an issue till the creation of the online pass. Which we are told is a way to nip used game sales.
And to be honest it may well be, but it could also foreshadow a coming games cost increase if all publishers use this method.

Beware of the rhetoric and use of language people use on this issue. 'Cutting in' and 'depriving'. The used game market has always been there yet there seems to be a strategy attempting to make gamers sympathise with them when they tell us the used market is hindering them as they don't have the funds anymore. Its always been there! It is not a new phenomenon that has arisen and taken a bite out of the market.
Instead of saying that the used game market is taking money away, they mean there is more profit to be made from ridding of the second hand market. Its always about more. Look at Sony testing the water with the idea of charging for PSN, COD Elite and now the battlefield crew hinting at the same. Greed.

This argument is still happening?

How about that used car dilemma? Or better yet. How bout the used girlfriend?

5 JRPG Games You Should Play Once Or Revisit