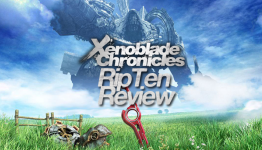 Justin Berube of RipTen writes: "Nintendo fans never thought they’d see the day, but Xenoblade Chronicles has finally arrived in North America. The game came out in Japan back in 2010 and hit Europe and Australia in 2011, and since then, North American fans have been begging for the game to be released stateside. Now that it’s finally here, was it worth the wait?"

Every Wii owner should buy this game!

Excellent review. I bought this game on release day and I have yet to play it, but it's on the top of my pile to play next. I may have to clear my schedule to play it, though :)

Luckily Wii U will be backward compatible with the Wii. Just one more reason for you to get a Wii U! :)

No, get a Wii. The Wii U will be overpriced at launch and quickly fall behind technology. At this point the Wii is a brilliant investment, as it's cheap and essentially a past-gen console.

Played. To. Completion. You are a machine, sir.

Still have some of the optional end game stuff to do (I've done some of it), but up until that point I'm pretty sure I've done everything possible including quests. Mountains of quests.

This game is truly amazing. That is all.

Thanks for the review!

-I absolutely love this game, and it Really made me feel better after being disappointed by Skyward Sword! :)

So you want to get into the Xeno series

How Square's Most Iconic JRPG Evolved Into Nintendo's Xenoblade Chronicles

Why Shulk is one of Nintendo's Best Characters