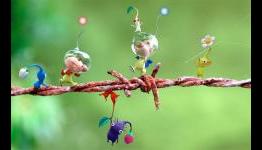 The U.S. release of Pikmin 2 for Nintendo's Wii console is now set for June 10, 2012, a morning press release confirms. The much-loved GameCube classic received a 2009 Wii-make release in Japan, Europe, and Australia as part of the publisher's New Play Control! series, but a U.S. version never materialized. Rumors of the Wii port coming to the U.S. first surfaced in April, and now we have confirmation straight from the source.

g4tv.com
- Comments (3)+ Comments (3)
TopNewestOldest
The story is too old to be commented.

hmm? have nintendo said how long they will support the Wii U

What, is a lazy release of an old port from 2009 not good enough for you?! This even has waggle support.