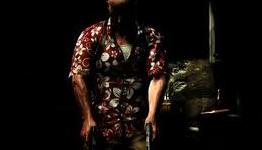 Edge:When Max Payne switches from a two-handed weapon to the handgun in his holster, he doesn’t reach behind his back to plant the larger gun firmly on the adhesive outer surface of his jacket. It doesn’t vanish inside the TARDIS-like confines of his pockets either, sent to that mysterious alternate dimension called the inventory screen. Instead, he loosely dangles the weapon by his side, while getting to business with the pistol in the other hand. You’d think this would make reloading tricky, but Payne has a system. He tucks the big gun in the crook of his arm, grabs and inserts a clip into his pistol with his freed hand, and lets the larger gun fall back into his grip.

Adhttps://n4g.com/General/Sponsored/arise
- Comments (24)+ Comments (24)
TopNewestOldest
Expand all
The story is too old to be commented.

What would you giver Borderlands? It was very repetitive imo and deserved a 7 max.

I'd probably give it an 8. Yeah it was repetitive but fun and it's a fresh take on shooters.

7 is believable. Lower than 7? I'd start to doubt. But I can buy anywhere from 7-9 depending on reviewer tastes.

so predictable to the point that they are desperate to be seen as different from the others!

I'm not saying it should get a higher score as I have not experience the game either but when they are doing this with every big releases, people will start to question their intention. The pattern is as clear as day!

Borderlands to me was a 9 if you played it with at least 1 friend. How it was meant to be played.

Personally, I'd give Borderlands a 7.5, because the lack of a decent story and the repetitive nature of the gameplay and missions (only repetitive after a while, of course).

The art direction, "unlimited guns," and the awesome coop goes a long way though. Obviously there's more to Borderlands than what I just wrote, but from what I can remember this is what I'd say about it.

Theres no "They" since it was done by a differen't reviewer. Differen't people, differen't opinions....

Maybe they easily state some of the flaws of the game instead of ignoring them because it's Rockstar.

I like Borderlands and I'm guessing you do....as long as you like the game nothing else matters

Borderlands deserved at least a 8 score (for me)... 6 is way to low. It's their opinion and i'll respect it. As for it's repetitiveness ... tell me one game that isn't repetitive ?

Borderlands was a solid 8.5, my Max Payne copy should be here anytime now. So Excited.

Join The N4G Rockstar Social Club Crew & get some games going once the 'Max Payne 3' is out on 15th.

Am 8 for BL are you mad. Its an OK game but the bad outplay the good.

I'd agree with some of what you said there to an extent, except for no replay value. The outdated graphics are assuaged by the art style though.

Despite all of these "faults," the game was still hysterically fun for me, so it did a lot of stuff right.

Borderlands deserved a 6. it was boring and copied almost every "idea" it had from every game under the sun. uninspired, uncreative and dull to play.

Theres allways one this game is never a 7 i havnt played it yet but after seeing all videos you know that there has been alot of love and sweat gone into this game. Well soon enough i will experience it myself.

What?? It MUST be a PS3 exclusive because EDGE only give low scores to ps3 exclusives!!
http://squeekyfromm.files.w...

A 7 from edge is a fantastic score if you look at the past of how they review. They expect a game that they gave a 10 to was going to give them a happy ending at the end of every chapter. A happy ending in the sense of the massage parlour happy ending.

Rent it out and judge for yourself if your on the fence,to be honest im getting tired of these so called 'reviewers' how many times have you actually played a game which recieved a mediocre review but you actually loved playing and got your moneys worth out of it ???

all the games from rockstar are overated