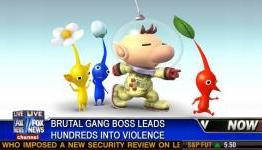 Poorly researched. Biased. Hysterical. Fear-mongering. All of these words and more could be chosen completely at random and for no particular reason to start an article discussing the tabloid media's treatment of pretty much any pastime it does not understand.

gamesradar.com
- Comments (19)+ Comments (19)
TopNewestOldest
Expand all
The story is too old to be commented.

Usually Fox News only go after the games rated M for Mature because the age minimum for them is 13+ /S.

Really now? Fox wants to act as if they have some moral high-ground to start calling things "filth"?

At least 3 of their top reporters have had multiple moments in which the filthy thoughts of their own minds accidentally slipped on live television. Enjoy the links below:

also, use this to see why fox isnt a real news network:
http://www.youtube.com/watc...

lol imagine if they attacked pikmin as something bad:

pikmen, a game that looks innocent and child friendly is actually a devil in disguise. it targeted at little kids and it teaches them early on at a young impressionable thing that some colours are inferior than others. it also condones slavery where those poor little creatures do whatever the master tells them to do, even die for him/her.

lol. fox news. an endless source of both hilarity and disgust. I would not be surprised if they did this

more likely than seeing gang related inunendo in children's games, they would probably make the typical accusations that it is

"subconsciously promoting the gay agenda and brainwashing your kids."

Keith Ablow does this a near constant basis, being the paranoid, mentally stunted, bigoted fear/hate monger that he is. He would probably say stuff like

“Link is too androgynous in the skyward sword. He will make your kids want to become transgendered!”

“this male character in animal crossing sends you letters with hearts! Obviously this is a threat to your kids!”

They constantly complain about the optional gay relationships in Bioware games. Apparently, according to them, video games should share their narrow, hate-filled world view and simply pretend that gay people don’t exist, and certainly not acknowledge them as having as legitimate relationships as straight people.

LOL. I think everything is "subconsciously promoting the gay agenda and brainwashing your kids." to Fox

Off-Topic: Love how everyone picks on Fox News for being biased and kissing the conservatives ass, when the mainstream media and other news networks are just as bad kissing the liberal's behind. MSNBC anyone.

Its trendy to hate on fox. Sometimes for good reason. Most times its just trollin to troll. The internet needs a whipping boy.

American news media is daft on both sides.

Isn't it about time people started labeling Fox News as mainstream media? It's part of the second biggest media empire on the planet! (give or take)

MSNBC is pretty bad, but I'd say Fox takes the cake. Also, RT is just the worst. [edit] It annoys me how some people think that a channel named 'Russia Today', funded by the Russian government is the real fair and balanced news station out there. It is not.

ON-TOPIC:
Gamesradar, what won't you do? Funny stuff

Fox news= gossip magazine. All they care about is ratings.

No duh. And so does every other network out there.

here are 183 clear, documented cases of fox news bending the truth and flat out lying. These are just in the past few years

Lovers in Shanghai Had a Wedding in Animal Crossing During Lockdown

"Vampire The Masquerade: The New York Bundle" is coming soon to the PS4 and Nintendo Switch