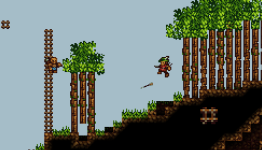 Who likes mining!? I do. And if you don’t, then nuts to ya! With games like Minecraft and Terraria, the user response to heavy labour as something other than a chore or striking trade has been a revelation that so many indie companies have tried to cash in on. But KAG is infinitely better than the “Castle builds,” “Fortress Wars,” and “Mine Cities” you’ll find on most indie marketplaces. King Arthur’s Gold is a competitive, 2D, combat based game with a heavy emphasis on mining and building as part of your defensive strategy. Based around two competing online teams of warriors, archers and builders, both after each other’s gold reserves.

Fun Fact: brought to you in part by the creator of Soldat.