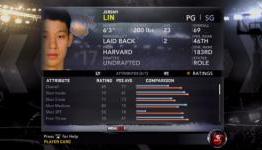 Well, it seems 2K Sports is very pro-active to what NBA 2K12 gamers want and they wanted a better Jeremy Lin to create Linsanity magic in their NBA 2K12 games with their virtual Lins. Just two days after 2K Sports upgraded Lin to 69 from 56 in the NBA 2K12 "Living Rosters" update, they upgraded him again to 75 today in another update, which is closer to where Lin should probably be even after he cools down from his Linsane pace, which he inevitably will.

Adhttps://www.releases.com/?utm_source=n4g&utm_medium=native&utm_campaign=c1
- Comments (8)+ Comments (8)
TopNewestOldest
The story is too old to be commented.

i remember him in 2k11, he was a 60 something without a real photo and was on and off the warriors roster for online play. could really only play as him in local games after altering the rosters.

for those worried about when melo comes back, the knicks will be better than ever. more worried about j.r. smith's influence (poor shot selections) now that he's a knick.

Let's see how he does when Carmelo gets back

lets see how melo does you mean.

Yes for sure. I meant Melo will definitely take some points off Lin's average though his assist rate should go up unless Melo just isos the whole time like he did before Lin

melo is the reason for new york loses dnt get me wrong he is a excellent player but he dnt pass the ball Lin dose he makes other better while still scoring.

NBA 2K20: 5 features that should be added or brought back