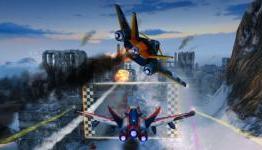 Let me preface this review by saying SkyDrift has every right to charge $14.47 for their game and I recommend it fully at that price. If you want to buy SkyDrift for $9.99 and then mail $4.48 to the folks at Digital Reality, I’d say go ahead, they deserve every penny. What you shouldn’t spend $14.47 on is three separate purchases of SkyDrift and both its DLC packs.

This may seem like a confusing proposition; why would I recommend that you spend more money on the product and yet forgo the DLC? Because the very fact that the content is DLC makes it nearly unplayable and hurts the core game. As I stated in my SkyDrift review, the two DLC packs for the game represent two massive oversights of the microtransaction market. Don’t restrict multiplayer content and don’t sell power. Having had a chance to become very familiar with the new downloadable Deathmatch mode, or rather the Deathmatch queue screen and the game that came with it, I can confirm that the problems I mentioned in that review currently make that content unplayable."