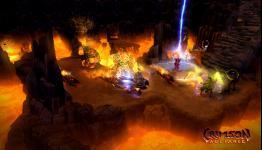 "The smash hit from Certain Affinity, Crimson Alliance, has had its first pack of DLC announced along with a release date. Following up on the intense combat action of Crimson Alliance, the Vengeance Map Pack allows up to four players to continue cooperatively hacking and slashing their way through the perilous lands of Byzan."

Already? this game has some seriously fishy prices

it was a smash hit?

'Crimson Alliance' is your Xbox LIVE Deal of the Week