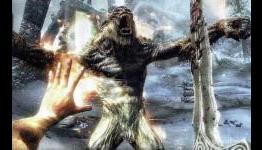 Speaking in a developer diary posted below, courtesy of TheGamerXperience, Howard talks about the various development changes the team implemented in order for the game to look and feel as epic as its size.

“We’ve pretty much rewritten all the graphics and the gameplay system, as well as used a new face system and interface system, ” said Howard. “And we knew coming off of Fallout 3 on the Xbox 360, that there was a lot we could still do to really harness the power of it. There is just this unlimited amount of detail we put into the world, from little things like forks and berries to mountains and dragons.

“We want all of that scale on th

I love in my video when the dragon picks up the troll and drops it, the troll didn't know what to do LMAO and it hurts.

they already said themselves that the pc version will be a generation ahead of the console verisons so what are you talking about. it looks amazing on 360 though, I cannot deny that.

is that you inside_out? i heard you got banned.

Dang i just wish they would show some footage of the PS3 version. I hate the fact that there are rumors that they gimped it due to the recent deal with microsoft.

Anyways if they do a crap job with it on the PS3 i just wont buy it.

30 days waiting for the DLC is no problems.
Elder scrolls are well known for sucking hundred of hours from gamers life so the wait should be easy.

Maybe it's a marketing ploy like EA is doing by only showing PS3 footage of BF3. just taking a shot in the dark.

Well, it's the same situation with battlefield 3 and modern warfare 3. Though, in the end, the games from top-tier developers with a solid background generally come out excellent for all platforms.

It's lovely that they are improving the graphics and everything,
But it's the bugs am worried about in Bethesda games.

This article has absolutely nothing new. We already know about the new facial system, attention to detail, and dragons. Just a rehash of known information.

anyone else notice the screen tearing?

just to be clear in the vid kingdoms posted there was screen tearing, you can disagree all you want but its there.

Who cares about the graphics, ITS SKYRIM!! :D

Unwinnable gets hands on with Skyrim

What Werewolves should be in Skyrim

Kill a chicken and Skyrim will punish you