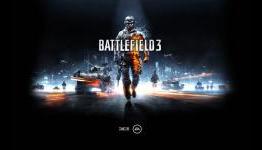 EA has positioned Battlefield 3 as its Call of Duty killer this holiday season, but don't expect the military first-person shooters to go head-to-head every year. In a new interview with Gamerzines, Battlefield 3 executive producer Patrick Bach said that annualizing the franchise would be a mistake.

the bar has been raised on shooters since the announcement of battlefield 3. its a massive improvement from battlefield 2 and a great step forward from bad company 2.

if dice keep to there 3 year gap then ill stick with dice.

i dont get how activision get away with selling a game then selling it again in DLC. they basicly make double from one title.

Learn something Activision
This Chapter is written for you

Annual installments are what put me off most franchises like cod, fifa, nhl etc.

Spend a few months getting good on the game only for it to have a sequel released. Then you're torn, move to latest game or stay where you are.

Its a shame as the longer a game is left without a sequel the higher the level of play you see on servers and the closer the community becomes as the scrubs and glory seekers migrate to other games.

Yeah whatever you say EA and while your too busy talking nonsense. COD still manages to break records year after year on its releases.

Just because a lot of people like to spend money on rehashed bullshit more than gold doesn't mean I'm going to start thinking that bullshit > gold.

BF3 FTW. I'm not even a bf fanboy, I actually like the enemy territory franchise more than anything else... but come on, COD has turned to shit, Infinity Ward is now RESPAWN - Don't buy shit from the fraud IW left behind.

While I'm no huge COD fan, it is still a good game as much as you hate to think so. And it's fun as shit when you play with your friends.

I prefer Bad Company 2 but I own all the COD games and will own the rest of them as well.

You COD haters are as bad as fanboys.

@blueshirt Sorry but I'm no cod hater, I loved the cod franchise before it turned into shit. Do you think this IW is the same the created the masterpiece that is cod 2?

I can safely stop talking to you now.

EXACTLY! CoD franchise isn't bad. It's just that every game after CoD4 gets progressively worse. CoD2 was the best, CoD came next, and then it just went to the dogs. BF has ALWAYS set to IMPROVE majorly upon the previous games.

Dont worry it will die out soon tony hawk and guitar hero sold gang busters to now look at them.

Actually, there are 2 devs on CoD. Infinity Ward and Treyarch, so there are basically installments of each dev every 2 years.

That's right two different COD games with 2 years of development in them. Plus EA is doing the samething anyway BF & MOH.

The last medal of honour had a massive gap between it from its last if I remember rightly, and medal of honour and battlefield are different franchises.....infinity ward and Treyarch still make the same game/onlineplay/engine/title repeated game Year after year.....

DICE only did multiplayer for MOH.

Seeing as IW lost their MAIN guys that actually knew what the fuck they were doing let's not give this new fake IW any credit, thanks.

Cant wait for the real IW to make their first game though outside of cod http://www.respawn.com/

It doesn't matter if IW has lost some staff. There are still 2 DEVS making CoD-Games. So there is much more time between the games. And talking about Gameplay, Engine etc. It is COD and not something else. And there ARE improvements, also visually! Sometimes I really wonder if most people play on SD-TV's or on old HDTV's which can really badly influence how a game looks.

That's like saying your favorite restaurant fired your favorite cook but they kept all the same waiters and you think the food will be just as good.

Sheep, i tells ya.

@dommafia: Don't mix real life with Gaming. That's a totally different thing. Modern Warfare 2 was great and I'm sure MW3 will be even better. So according to your silly statement: The cook still cookin'

EA is right, I totally agree on the statement..
Activision should refrain from making COD every year, Honestly, it's getting boring, Same mechanic, same graphics, same sh!t every year..

"EA would never force us to release a game every year"

Hmmm, now where does Madden football come from?? That's the very definition of game released every year with very little change.

But it's not made by DICE and I think that is the point they are making... Madden is made by EA Sports, so... by EA themselves, not a whole lot to say about that (anything else than "it's shit" of course), but they aren't forcing DICE, because they just know that their games are always to count on.

Activision ftw...
.
In regards to the 2 year cycle perfected by the peoples champ, COD...

...You have 2 different devs making a game 2 years apart from each other, works out perfectly. Sledgehammers version of COD should be EXTREME as they were the makers of the criminally underated and underselling Deadspace 1. Treyarch next COD will be phenomenal as well as Activision has given them all the resources they need. I hope to see 2, yep 2 COD next year...how great would that be. \o/

Battlefield 3 is a mess which the beta will ( already has ) confirmed and MOH multi-player was also made by Dice as well so these guys have been technical around 2 years in a row. When did Battlefield 2 launch??? EXACTLY!!!...O_o

EA will no doubt have MOH next year and the fanboys will pat EA on the head as usual for making another fps game, with a new name, and like the last one, pretend it's new...Dice will probably do the multi-player...4 YEARS in a row...O_o

Try telling that to Activision.

It's true, I absolutely loved COD4 now a few years later (and 2 more purchases) I can't imagine buying another COD game for at least 3 years.

Dlc best way to expand a game better and cheaply