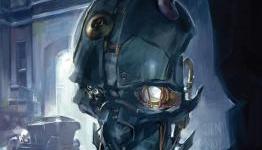 Gameinformer: Bethesda’s next game is a first-person stealth/action adventure, and we’ve got the first look at it in our upcoming August issue. There are dozens of reasons why you should care about this weird-looking game you've never heard of. A few of the most important ones are after the jump.

I cant wait to hear more about it, i thought that the cover will be revealed in august,i didnt know that it will be now

New IP, with good talent, should be intesting!

"Bethesda Softworks believes in their vision and is giving them all the time, money, and development help"

Brink me a river.

Brink had some amazing ideas with devs that had a good track record (Wolfenstein Enemy Territory). But the devs refused to show us any gameplay until it released. The last gameplay was saw before release was E3 2010. The game had amazing graphics then (better than most games). But then the devs did whatever they could to screw it up and they succeeded.

I think Bethesda Softworks is moving in the right direction but they really need better game engines and production quality.

CryEngine 3 is available for licensing as well as The Source Engine.

U mad bro? They have Tech 5, among others

They said no one would see it coming. Everyone sees that coming.

hahaha, what happened to fallout online?

Looks really good. Also with the people they have behind it then it should be great.

Wooooooo! New IPs are always music to my ears. <3

Another game from Bethesda. Wow, their lineup is pretty amazing. Lots of new IP lately.

It has some big names (Deus Ex, Half-Life) and the devs meet with Todd Howard regularly. I haven't seen anything but it is already looking quite good! :)

but really, I bet it turns out to be an exclusive to one of the consoles. Not Wii of course that shit is horrible.

Why the Dishonored Franchise Is Worth Revisiting in 2022