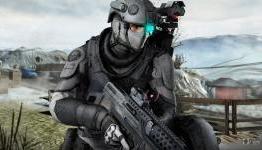 Ghost Recon: Future Soldier is 'Better With Kinect' According to Box Art

"A quick look at the new box art for Ghost Recon: Future Soldier over on Xbox.com reveals that the game is bearing a Kinect banner, or more specifically a "Better With Kinect Sensor" strapline, revealing that Future Soldier will be compatible with the motion tracking device."

How is this annoying? This is the first proper hardcore game with Kinect..

@ jmorgan below, look at the number one user on n4g and tell me how many bubbles he has. Truth is that the high bubble ppl are ps3fanboys.

Yeah! Yeah! This is great news. This is the start of hybrid Kinect controller core games. Just as most of us Kinect guys have been saying: there are ways to enhance gameplay by adding Kinect as an option with the controller. If this is well received, expect to see this in more and more action games going forward.

E3 is looking more and more interesting by the day.

@Nate: I delieve that to be true. I believe I mentioned that as a possibility when the delay was revealed.

I think a lot of the integration will be voice commands, head tracking and grenade tossing. At lease that is what I am expecting.

Whats nice about it? Motion controls are turning harcore games into casual games....Socom is a perfect example of that.

If they do it right with some intuitive controls like a quick throwing motion for grenades, hand signals for direction of squad members, voice commands for squad actions, melee movements, HUD display & menu's that you can interact with by simulating a virtual keyboard in "Minority Report" style, then this will be a huge marketing tool for other devs to intergrate kinect. I have no doubt REAL gamers are going to love anything that brings them more intuitive interaction with great hardcore games. lol, I keep hearing people say "I don't want flail all over my living room", yet none of what I described has you jumping behind the couch for cover, simple quick gestures is all that are needed and its already possible with kinect....dev's just need to implement the right control scheme, in the right way, for the right game. I don't know why ANY gamer would oppose kinect evolving controls and the way we manipulate our games, hell with that mentality we should have just stuck to Atari's joystick and 1 button, especially since ANY kinect intergration with core games can simply be an OPTION but I mean the whole point of gaming is to draw you in to the whole experience of that world, to me things like this would be one more step in that direction, again if done right it WILL be the start of a new wave of more immersive games. I think some just don't want to see kinect be successful with hardcore games because it doesn't have a PS logo on the box.

I'd just be happy with a release date before I'd prefer to start speculating about that. Could be possible though that maybe part of its delay(s) has been down to integrating Kinect.

It was suppose to come out this year but it got delayed until the 1st quarter of 2012.

well i hate it all the cool stuff is video you walk up to kill a guy press x and watch it happen???

The feature is probably using your voice and maybe hands to control you troops which could be easier and a different way of playing. I do not expect kinect only (controller hybrid)

btw the whole "better with Kinect" will be a marketing ploy and people will have to decide themselves.

Definitely a marketing ploy.. voice control for troops would certainly add a new level of depth but in most game's cases, I can't imagine it being anything but slightly better.

Rainbow Six 3 had voice control for your squad and that was 9 years ago.

Yeah and RB6 is the perfect game to use hand gestures and voice commands in with Kinect.

I'm actually curious to see how it will be implemented.

I can't see it ending well.

So far every bit of Kinect I have played has made me glad to god that I never bought one.

If they implement Kinect Effectively it will me amazing

lol bubbles that was hilarious.

"Works better with Kinect" and what about "Supports Move". Might happen.. Personally I dont see Kinect as a reasonable purchase..yet. Too casual atm IMO and well, Ghost Recon is very dull.

WWWAAAYYY to casual at the moment.

Kinect my ass, control devices should minimize movement not maximize it. Emulating the actions performed on screen in real life may seem like a great way to enhance immersion but you're actually widening the gap between mental impulse and in game reaction. That gap needs to be as small as possible, I highly fucking doubt that a hardcore tactical shooter will benefit from me having to fling my fat ass around my living room like a 4 year old with a plastic toy gun.

Oh wait it's sadder, because I won't actually have an imitation gun, I'll be using my imagination.

i do somewhat agree with what you said but based on some romours floating around that kinect would be updated to register finger gestures http://123kinect.com/finger...
i wouldnt think one would need to pounce around the living room like a lunatic like what is being done now.
reducing the gap between mental impulse and game action is true but thinking carefully about it, to send a squad member to certain locations for a tactical flank or firefight would is generally still poorly implimented in most games today using that feature even mass effect i am pretty sure most ppl didnt use squad commands while fighting.
Kinect if done well could actually be fresh and possiblily innovative.
lets just see what creative minds can do or what fun things they would stumble on with kinect hell most profound discoveries are usually accidentally found.

"Kinect my ass, control devices should minimize movement not maximize it."

That is entirely incorrect. Minimize movement would be a push of a button and the game will play itself. Is that fun? Controls are made in a way to make games fun!

It is how you implement the controlls as opposed to what specific controlls you have.

When I said that I kind of assumed we'd be working with more than three brain cells and staying in the realm of logic. Of course that's not always the case.

There is a relationship between input and movement. Whilst movement must be minimized input should always be maximized. Oh wait, I forgot who I'm dealing with. You'll probably point out how the next logical step is to write the fucking game yourself.

Let's just say that there's a sweet point and so far motion control has missed it. ALthough as Budda points out, fingure gestures and voice control could work nicely.

You made a very broad statement without making a ANY case for why that is better and instead resort to attacking.

Motion control have advantages that the traditional controller cannot match in the game department. The question is what else hasn't been tested yet?

Remember the NES controller with 2 buttons? Then think of the time when FPS wasn't possible on consoles?

Point being, you might give up something, but gain something else much more significant!

I suggest you take some time to think over deeply before responding with your last bubble!

i really want to see some kinect gameplay!!!!!

Kinect is awesome & can't wait to see some actual games for it such as hybrid. Future solider would be great to go in silent and use hand signals for squad commands and voice.Also finger gestures for typing in codes sounds pretty cool.

but i thought you were the controller???
we all knew that the kinect would be good as a hybrid tool for games, but microsoft announced it as a stand alone device that didn't need any controllers. We all knew this would happen, maybe now there will be awesome games with kinect.

Not an xbot(for lack of a better term) so obviously I'm not a kinect user either. But assuming this works in the way I'm imagining, then this is really cool for kinect fans. Hope it works out for ya'll.

They might show a demo of Kinect with Ghost Recon at the Ubisoft conference or Microsoft conference. Hopefully it really does add something to the game, I've always been a fan of Ghost Recon, though I do prefer the older ones, with night vision and stuff back on the original xbox.

The Best Ghost Recon Games to Play Before Breakpoint

3 more arrivals hit Xbox One via Xbox Backwards Compatibility – Are they worth the return?

Which of this weeks Xbox Live Deals With Gold bargains should you pick up? – 23rd June 2015