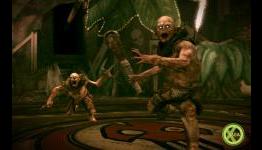 "If id Software’s aim at Bethesda’s BFG Showcase was to show the diversity of Rage, I’d say it was very much mission accomplished. After all, we did go hands-on with five missions with varying different goals and in hugely different environments, and we even got chance to see a brand new area. You can’t ask for much more… Did we say we actually played it on the Xbox 360 as well? No, well we did, and id’s claims that it can achieve new highs in terms of visual fidelity on consoles with its id Tech 5 engine is right on the money. In short, it’s a technical masterpiece."

There's little doubt that this will be a game that sets a new high water mark for FPS. It's Id after all. John Carmack is the mac daddy of developers and continues to know hardware and how to make the most of what he's got to work with. This game will cast a huge shadow on other shooters.

Maybe the only time i "slightly" agree with you =:0

Xbox Game Pass – Games You Might Have Missed: May Edition

Rage vs Rage 2: How the Sequel Is Better Than the Original Game

“Charon’s Staircase” is coming to PC and consoles on October 28th, 2022