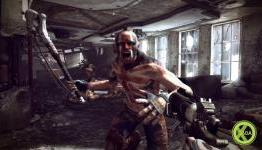 "Keeping games fresh and in the hearts and souls of gamers in this day and age of 100 games a month is tricky, especially when you’re a single-player focussed game.

Talking to X360A last week at Bethesda’s BFG Showcase in Utah, id Software’s Design Director, Matt Hooper said that they’ll keep players interested by offering them more of what they resonate with."

I'm on the fence about this game. It kind of puts me in mind of bouderland which wasn't bad it just became repetitive with some of the quest later on in the game. What do y'all think is it a souped up bouderland or am i way off here?

It reminds me of Borderlands, except Borderlands had a thin story but was not necessarily a short game; Rage, if it's five hours, may have more of a story, but five hours is hardly enough to get excited over if the world is touted as a "semi-sandbox" game... and Id was never known for plot-heavy games. Heck, Heavenly Sword was crucified for being five hours, but at least the length fit it's gameplay, story, and genre.

It also reminds me how they cut-out a faction to make it fit on two DVDs and they got the nerve to tack some piece on as DLC. I'm still kinda off the fence entirely because of that.

Don't get me wrong, I'll give Rage a chance, but I can't trust reviewers drooling over Cramack's jewels, and I highly doubt this game will have a demo, so it's probably a rent; and with five hours to kill it, it's probably gonna be a short rental at that.

I'm tired of BS DLC pre-planned before a games release. That's it, I'm not buying this game, ever.

i believe it was mentioned in an interview that some of the planned DLC will be extra co-op stuff. i'm all for DLC that's co-op related (ie more missions). same thing as map packs and everyone always eats those up. don't see the big deal

This game was announced before borderlands.

i know that it just reminds me of that.

this will be vastly superior to borderlands

Hey here is an idea why not just put it in the game!!

I'm so glad the witcher will have free & paid dlc..

Devs love to mooch off of the console players & it ain't right for consoles or pc.

Well Id are owned by Bethesda now.. and we all know how much Bethesda loves DLC.

IMO DLC has been abused this gen of consoles.

I hate dlc never have payed for it except this one time on steam only because it was like 30 cents. I like that price 30 cents! dlc should be really cheap imo.

Xbox Game Pass – Games You Might Have Missed: May Edition

Rage vs Rage 2: How the Sequel Is Better Than the Original Game