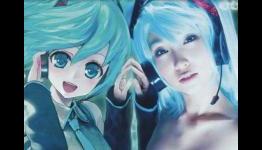 Last week, it was announced that Vocaloid's Miku Hatsune would be appearing in Weekly Playboy (news story here: http://n4g.com/news/729961/... ). Now, those images are finally here.

Even though she's performed in concerts, Miku Hatsune is an entirely virtual creation. Pin-up model Risa Yoshiki, however, appears to be real! In the latest issue of Japanese tabloid Weekly Playboy, both idols, 2D and 3D, come together.

Weekly Playboy is dubbing this fusion of the second and third dimension as "5D". Yes, this is what a 5D layout looks like, apparently.

A non nude female in a Playboy magazine? This is why i buy Hustler instead... *like a boss*

ONTOPIC: WTF is this

It's fappable and hit worthy. :)

This Sexy Vocaloid Cosplay Is Amazing