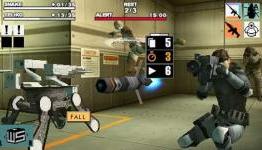 Why You Should Play: Metal Gear Ac!d

GamingUnion.net: "Metal Gear Ac!d has always been something of a pleasant surprise for me. After all, the Metal Gear franchise is one of the most well known in the world of video games - almost everyone knows who Solid Snake is. However, the majority of games have revolved around the whole stealth-action gameplay mechanic, while Ac!d was a game based around cards. Yes, cards. The stealth was still there, but everything was now turn-based and dependent on the card deck you were using. And having played a few different virtual card games in the past, I was really curious to see how Ac!d would turn out."

Hmm, I've never been one for card based games, but I might have to give this a shot!

I'd be all over it if I owned the system.

I used to have it back when I had my PSP-1000. It was a great game. A little weird getting used to the setup, of course, but I thoroughly enjoyed it. If I'm not mistaken, it's only on UMD. I really wish more of the Playstation catalog was on the PSN for my PSP Go.

:o( That's the biggest downer for me. I got my new PSP GO on the 11th of Feb and wanted to buy the old game "Infected."

I just got a Go not even a month ago, and I absolutely love the little thing! (The battery life and ergonomics could be a little better though, but overall I'm just in love with it--and it's so cute sparkly white!)

I'm pretty disappointed that Crisis Core isn't on the PSN, for sure. But I'm enjoying VC2 too much at the moment to care. And after that I'll dig into Peace Walker... so it'll be a while before I really start to notice the big name absentees on the PSN.

But yeah, Blaine, the Go is an awesome device other than the noticeable lack of library on the unit. I even take mine to work and listen to MP3s on it.

I've got the white one too, and if Sony comes out with two color models for the NGP, I'm torn on which one to get. The black looks good, but gives it more of a look the standard PSP had.

I kind of like the white one. What about you guys?

I'm one of those purists lol :P

A!cd was just made of win, absolutely loved it, and it didn't feel like a gimmick with the card decks either. Though the pseudo 3D stuff in two obviously was.

Come on people it was a great game i had a ton of fun with it.

Couldn't agree more ... some of the most fun I've had with my PSP.

Already play this game years ago and don't like the card based system. But i still enjoy it :)

Ranking Every Game in the Main Metal Gear Franchise

Game Ideas That Were Crazy Enough To Work