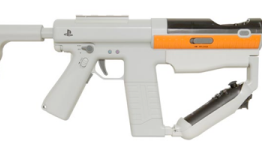 Trevor Kennedy of TNT Gaming Voice writes, "At first glance, the PlayStation Move Sharp Shooter by Sony seems like it might qualify for the “gimmicky plastic peripheral” pile that’s currently gathering dust in my storage room. Let’s face it, none of us play Rock Band as much as we used to and I find it entirely possible the Sharp Shooter could fall into the same category in a month, six months, a year...

For the time being however, I have to admit my time with the Sharp Shooter has been surprisingly fun and relatively free of the frustration level I was anticipating."

Adhttps://n4g.com/General/Sponsored/arise
- Comments (9)+ Comments (9)
TopNewestOldest
The story is too old to be commented.

Dan's Review (without ever having used one)

The sharpshooter looks like a decent piece of kit that would help immerse oneself more fully into the game.
Unfortunately being overpriced I personally won't be buying one as £40 for what is essentially a piece of plastic is just a waste of money.
I also have some concerns about the calibration with Move. I use Move when I play Killzone, it works well and I fully enjoy it, and the calibration going quickly out of sync isn't a problem as I am not aiming the Move controller but the onscreen crosshairs. But once putting the Move into the Sharpshooter my style of play would change and I would quickly tire of losing calibration when trying to aim.

Personal opinion:
Cool idea.... let me know when its half price and I might buy one. If you sort out a way for me to lock the calibration in for each gaming session then "might buy one" will turn into "definately buy one!"
For now though I will stick with using Move on it's own as that works just fine for me! ;)

Yea my girl works at Gamestop and was saying some people were bringing them back because of calibration issues. Something about when you aim off screen it messes it up. I played the whole way thru K3 with the move (not gun) and didn't seem to have a problem. Is it the gun programing making it do that ya think?

No mate, it's not the gun itself that is so much the issue with calibration... its just the Move isn't that great as a lightgun as it doesn't hold its calibration well.

That is not that much of a problem when just playing with the Move on its own in Killzone as you are not aiming with the actual controller... you are just using that to move the Crosshairs.

But when you stick it in a gun and actually aim it like a gun you want the aim to stay consistent. Like I'd want to aim through the "iron sights" during calibration and get it perfect and then have it stay that way. But the truth is it doesn't do that. If you get it that way you can be assured that within 5 minutes that it will be at least an inch out, and by 15 minutes it will be alot more out.

The Move is a great piece of kit and I like it, but its just not great as a proper lightgun.

The Move plugs into it using the bottom port. It's not like the other rifle controllers on the market.

For the most part button control is transfered to the rifle where it counts.

The thing is solid.

Edit: Re Calibration If the light changes in the room too drastically you'll need to re-calibrate.

Solution: Keep the lighting consistant and don't shift too far out of your original position.

Im still on the fence about buying one of these. It looks cool but 40 bucks is 40 bucks.

In Europe it's almost twice that price. That's just sick.

Yrah no sh!t Nicaragua, I'd rather just go the extra ten bucks for a DS3 (jungle green). That's IF I needed another controller, which I probably will for the three player couch-coop TRINE 2! YEAOW!

Gonna pick up the socom 4 deployment pack for $150. It has the rifle, two move controls and the eyetoy and the game . That's a saving of $64 Not bad.

I find it a lot of fun, but i have to have table to rest my arm on or I get tired pretty quick.

One thing I think would help control schemes for it though is 90 degree turn buttons so you can precisely turn 90 degrees or press them both for a 180 then use the bounding box for more subtle camera movements. That would also allow for a larger deadzone and more of a lightgun feel to aiming.