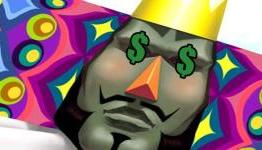 The Worst DLC of this Generation

"Downloadable Content is supposed to enhance a game after it's conclusion, expand the multiplayer or add new features to promote extended play. The problem is for every masterpiece of DLC like The Lost and Damned, a Grand Theft Auto IV expansion, there are just as many duds or cash ins. You may have your own list but here at GamePlayToday is our list for the worst DLC this."

That beautiful Katamari DLC was the worst. It was, as far as I think, worse than even the way EA bends people over.

But it all comes down to whether people are dumb enough to pay.

Why is it that anytime someone doesn't like a certain release of DLC, people are "dumb" for buying it? Is it at all possible that the DLC sells because there are actually people out there who want it?

Sometimes it's as simple as unlocking stuff in the game. What's the difference from people buying GameShark or CDX back in the day to unlock stuff?

I only disagree with you on the "unlocking stuff" part.

Devs could easily program a cheat code in...but they don't do that anymore.

There are a lot of games with cheats this gen. Multiple games I buy have "cheats" or "codes" right in the menu. They just disable trophies and achievements on my PS3 and 360. There's ntohing to disable on my Wii, so I put in cheats on that all the time.

Yeah, but what I'm saying is the devs could easily program a cheat code for those who 'don't have time to unlock characters'. That way the people that don't have time can unlock everything right away (even if you have to punch the code in every time the game boots).

This gen many developers have removed codes like that, and instead you basically pay for the code through DLC. It is stupid and should not be allowed to happen. They can spin it like they want, but it is just greedy.

If you want to play with all Street Fighter characters (or whatever) right away, then the dev just has to program in a cheat code. It is a no brainer for all fighting games. People that don't want to earn characters get them right away (although I'd make them enter the code at every boot and disable it for online play).

If they want to play online with the characters, then I guess they could make the customer purchase them, but how long are these people gonna last online if they don't want to play the game to unlock people?

wouldnt it be the worst DLC ever? This is the first generation to allow DLC.

Either way you say it, it still works. xD

Plus, the PC had DLC before. Just saying. :E

The original Xbox had DLC, too.

I wish more devs were like Valve these days...free DLC (Steam anyway)

Surprised no Capcom games were mentioned, considering how a lot of their games contain DLC, many of which are already on disc.

it wud be counted if the dlc was actually finished. it wasnt done, so why do people keep complaining.

its like saying u have a piece of digital art on a SD card, its on there but its not finished being painted. u still count that as complete?

people are so closed minded, damn, not like the dlc came out day 1 or somethin, took months for the RE dlc and a month for MVC3 characters, tontop they gave free shadow mode dlc

I was actually referring more to stuff like Alternate Costumes in Street Fighter 4 (Not Super, just regular SF4), which came out about a day after the game was released. I'm well aware that Jill and Shuma Gorath couldn't be finished in time for the release date on MvC3.

-
So instead of letting me actually work to unlock these faster cars, I HAVE to buy them - coming to a total of more than the game itself? Oh, and nice job taking up 35% of my screens space with ads for those cars, ads that you can't close until you've bought the cars with real money. Sweet.

It isn't an epilogue, it's the ending to the game...you actually have to pay 10 bucks to see the ending.

KZ3 a game with lack of content and chunks of useless data(41 gig) to scare pirates that have limited bandwidth...

Plus the fact that the paid DLC was released the same week of the game's release...

If it not locked its chopped from the game itself...

Games must be unsatisfactory for the consumer in order for the gaming industry to be efficient by selling the game in pieces...

Idiot, the "paid DLC was released the same week of the game's release" was free if you preordered the game. If you were gonna pick it up used or long after the fact, then its your fault for losing out on something free. Its not gonna effect your game at all, its just 2 extra maps that you'll be able to play on. I don't see you complaining about other games that offer free DLC if you preorder, but if you buy it later on you'll have to pay extra to get it.

Also, the article says "With the cost of development and the retail margins, £40 is a fair price [to us], but for the consumer it is too much." ... “A good price of a game should be around £20 – but for this price we can’t make a ten to 15-hour adventure. So for £20 we should offer consumers four to five hours of gameplay, then after that we can make additional money with DLC."

Nice to take it out of context, even the article is titled "Namco feels that game prices are too high".

Any Capcom DLC or I should say unlock key for content already on the disc. Made me stop buying Capcom games all together, the last Capcom game I bought was RE5.

Gearbox knows how to do DLC, Capcom should learn from them what DLC is all about.

Moxxi's Underdome, Seriously? With 4 Players its pretty good.
But my opinion is biased as you can probably see...

With Borderlands in general, the game and DLC was more fun with other people / friends than playing it alone.

The Fight: Lights Out is at the top of my list for worst DLC. They offer cheat codes in bundles of 10 uses for 99 cents.

Yes that was horrible.

Red Faction Guerrila still as some really overpriced DLC and the game itself is cheap as dirt by now.

When You Really Think About it, Katamari is Probably the Most Disturbing Game You'll Ever Play

Which of this week’s Xbox Live Deals With Gold bargains should you pick up? – 1st Mar 2016