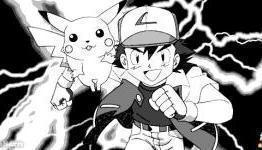 The small tweaks in Pokemon Black, such as the improved visuals, new battle modes, and enhanced online features, go some way toward making it feel like a new experience, but it's difficult to shake the feeling that this is the same game that's been released countless times before. And yet, underneath the formulaic narrative lies a deep and engaging RPG. The quality of the battle system and that undying urge to catch 'em all means you're still sucked into its world, eager to explore its extremities just to get that one Pokemon no one else has captured yet. If you've never seen the appeal of the series, then the lack of innovation in Pokemon Black will do little to change your mind. Fans, however, should snap it up straight away.

I like this game a lot, very addictive lol. But some of the Pokemon just seem like they lack creativity and some are just stupid.

yeah i think gamefreak really amped the story in this game, far much more then any previous (which were all the same story). The pokemon however are meh, some of them just remind me of past pokemon and some of them just look plain obvious of where they came from (ice cream wtf)

Wow, man. That type of pokemon doesn't even make sense in the context of the pokemon universe.

unless ice cream was accidentally created in a laboratory by mixing the dessert with radioactive waste or something.

It's the lowest score I've see so far :(

Got points lowered for being the same

and black ops gets a free pass...

I hate BO & CoD as much as the next person, but pokemon has been around way longer, they should find a way to innovate a bit more that isn't just adding pokemon or changing visuals.

Well, Pokemon comes out with 150 pokemon every year, and in resent games has been adding twists to the story. COD does come with new stories, but Black Ops maps are worse than Black and Whites Pokemon.

I am expecting this is the year that COD will get scathed for repetitiveness. I saw bits of it happening in some reviews for Black Ops and hopefully justice is served in the near future.

"Well, Pokemon comes out with 150 pokemon every year"

The Bad
"It's the same Pokemon formula you've seen before."

Wow, they took that many points off just for that?!
That's just ridiculous. And you're right, how come so many shooters out there, most notably black ops, get to ride the repetitive wave without major scrutiny?

Not to mention the frankly RIDICULOUS amount of connectivity Black/White features. It's pretty staggering how much you can do with friends or even people over the internet

You had no childhood.

So people who didn't play Pokemon had no childhood? You cant judge someone childhood cause they haven't played Pokemon. Maybe thats why you have one less bubble cause you jump to conclusion. Now whose the person acting childish now?

Personally this is the lowest of Pokemon. The Pokemon are resembling Digimon now.

Wow I was actually shocked to read this. Even though I haven't played Pokemon since Ruby/Sapphire, I still thought the games were good for newcomers to the serious. It got old for me.

I still have all my old Pokemon cards in my binder though :D

I've read 4 or 5 reviews for this game and every time they explain the features I think that I played the exact same thing in the silver and gold releases 10 years ago, and those weren't too much different from the red/blue originals which are 14 years old, and they are among my favorite games of all time.

Exact same premise, exact same format, sure pokemon change but the game has not changed significantly since the first one. If this is the best they can get after 3 or 4 handheld generations and 14 years its disappointing.

Its just sad that they don't really put the millions they make off these games into actually developing a great new one. I mean for 10+ years people have been asking for a full fledged console Pokemon game, but it has never even been considered(only stupid minigames and the coliseum one).

The only reason they don't actually make one is that it would take serious effort and money compared to the handheld versions but make about the same money, as long as they can milk the franchise they will do it without actually trying to make a truly better game.

They need to make a fullscale console pokemon RPG with proper 3d graphics instead of sprites.

Fans have been crying out for this for years yet they continiously keep releasing the same game with a different skin for years.

I'm not saying the game is bad or anything but Go for a risk for a change. Do something a bit different. Game Freak has been stuck too long in its comfort zone for the past 15 years.

How dare you compare the ever improving, surprising, and delightful super Mario to the tired and stale Pokemon series.

and what the fans want is sprites.

Lazy cos you disagree with it?

Its far better written than the IGN review.. Once again, a person just looks at the number at the bottom and argues that point. :l

Pokemon does not need to change. If they keep adding tons of new features, I can't really complain. The Pokemon fever kicked off once again as soon as I loaded up the game.

Pokemon games for handhelds never get old for me. In fact it would be awesome if they remade Yellow version for the DS or 3DS.

The Top 7… Most disturbing things about the Pokemon universe