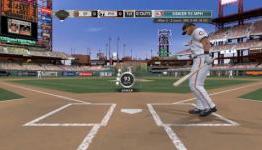 Excerpt: "The analog pitching is still the same, which is a good thing. However, from the gameplay, it feels like getting the hitter out is a little harder now, unlike the previous editions when one pitch would always be chased (yes, we’re looking at you, Mr. Slider.) Fielding seems a little stiffer, but it turns out that fielding ratings have a real effect now; if you’re not a good OF, you’ll be slower and you have to get closer to the ball to catch it. The computer, incidentally, actually committed an error in the infield, something you seldom saw in 2K10. The pitcher’s glove isn’t a vacuum, either. Hitting feels the same, though – tapping the analog for contact, pulling it back for power. It’s hard to say if it’s improved, but it isn’t a detriment, at least."

MLB 2K11 is Released for OnLive