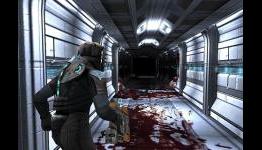 GMRFM EVAN: When I think of mobile phone gaming I still think of solitaire, texas hold ‘em and awful platform games masquerading as Call of Duty titles. Apples Iphone has attempted to turn itself into a viable gaming platform but only seems to be able to do things like tower defence and other flash staples well.

With this in mind it was almost as an afterthought that I approached the Ipad and Iphone demo station at the recent Dead Space Exposed event I attended in London. I’m certainly glad I did as I got a comprehensive and eye opening demo of the game on both platforms from Andres Constantinidis who worked on the game.