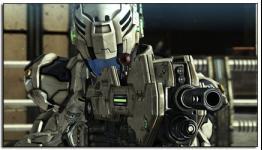 Analysis of gameplay segments from both SKUs.

eurogamer.net
- Comments (39)+ Comments (39)
TopNewestOldest
Expand all
The story is too old to be commented.

Not speaking about 'time completion' drama.

But Platinum Games showed they could handle the PS3 and created a great looking multiplatform game, stuff that 'huge' studios can't even do (Rockstar, 100 million dollars spent per game and can't make a good port).

This is the first game developed by Platinum Games on PS3. I'm looking for feature titles. SEGA did Bayonetta PS3 port btw.

You are forgetting PS3 framerate issues.

And I'd rather have that then nasty screen tears.

I've had no issues at all. Cant you just be happy that someone else is happy.

Does it bother you that much he's enjoying the PS3 version?

Oh no! Not euro freaking gamer again! Stay away from this site lads.

wow the 360 version is tearing up sotin rotten lol

you PC fangurls are REDIC!.. you gals need to relize that consoles are the new generation,and no matter how hard you bash them they are here to stay for a LOOOOONG time.

i say it everytime and you PC fanngirls, back up my claims.

PC fanboys have THE worst superiority complex EVER.

If it aint PC then its only worth bashing huh guys.... worst bunch of gamers ever.

You really think the PS360 is going to stay for a loooooong time? I have a feeling that when I'm on Windows 9 nobody will even speak of the PS360 anymore.

@Raiinstorm81: It's not a complex. I just try to convert as many of you as I can. Make you see the light of day.

When you are on windows 9, you will have re-bought your PC 5 times - at min.

what you mean converted? we all have PC's.. and most likely way before you ever did.
... trust me consoles will be around for a while sry to break it to ya.. but with the ressesion goin on everything is just going to get that much harder and peeps are gunna be looking for the cheap.
thats where consoles come in,BEST bang for your buck.

youll be on windows 9 and it still wont run as efficient as mac osx. :P

Both versions perform very well.. so congrats to the developers. I'm sure that they've done their best.

Is sub-30fps average what you call performing well?

It's nice to see both versions are really about equal, but I'd also like to see them both maintain 30fps. The beginning is pretty bad, but the performance does improve later on I guess.

EA's Fight night is just a rehash of Boxing for the Atari 2600. You wanna go old I'll go old school.
DEAL
WITH
IT

Uncharted is just a rehash of Pitfall for the Atari 2600,Yeah!
DEAL WITH IT(imagine in really high pitched voice)!

despite your comment,the high pitch voice part reminds me of that dude from I love you man LOL haha..tha annoying d-bag. i could picture that. :)-

so what's the point of a comparison

the game performs very well on the 360 (and I think it would on the PS3, too).
BUT you will notice the fps lacks which you wouldn't have on a good rack. Still, this is a console title for sure and I would hate to play it on a computer IMO.

I got this at the weekend(PS3) and I'm enjoying it quite a lot, closest thing I've ever seen to ZoE which is why I got this over MoH. Also pleased they ditched multiplayer in favour of challenges. Should mean I can actually platinum this game as well which is always nice.

Forget about Scalebound and Bayonetta 3, Platinum should be working on a Vanquish sequel

Bayonetta and Vanquish – A Platinum Award for Action Game Collections

Five classic games that need to come back