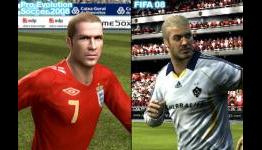 The epic fight between the two soccer giants Pro Evolution Soccer and FIFA has been going on for over 10 years now. Cynamite takes a look at the scores from both games and shows, at which point PES overtook the FIFA series.

I can't see that changing until the next generation of consoles.

Pro Evo is back to reclaim the number 1 spot.

just because pes has improved alot over pes 10 dont mean much, its still the same robotic game it has been for a while. and if you have played fifa 10 then moved to 11 its improved on a lot on what was already a great game.

agreed, pes11 is an improvement on last yr but it still lags way behind fifa at this point.. all the same issues that make it bad are still their

It's a shame that people such as yourself are still stuck in the dark days, clinging onto the hope that PES will be what it once was.

I was a huge fan of PES back in the day - as big as you could get, really - and I still believe that PES 5 and 6 are the best football games of all time. But I played the PES 2011 demo and deleted it after two games, because it's just horrible. Passing is decent, but that's about it; the player movement still borders on robotic, shooting is way too floaty and the presentation is mediocre.

If you really believe that the 'King' is back, then you must have a very short memory. PES this generation has absolutely nothing on the old games, nor does it have anything on FIFA this gen either; its rival is superior in almost every way.

It's actually a step down, they ruined the Fifa 10 formula and this is coming from a Fifa player. Am not a PES fan so i really don't know if the new one is good or not. My angle is the fact that EA messed up Fifa 11, i have spoken to many diehard fifa fans that feel the same way. Some are considering to just stick with 10 and see what 12 is like.

FIFA 11 is superior to FIFA 10 in practically every way, without a doubt. I find it laughable that anyone could think any different.

FIFA 10 was a great game, but it had way too many flaws. FIFA 11 is a much more refined experience, and is all the better for it.

2006 - NOW -> Fifa started to show its quality on this current gen and it evolved year after year while PES was still way behind.

pes2011 is much different from any next gen pes, this is really a huge improvement

Its funny to read or talk to the FIFA fanboy they cant accept the true and hate PES.

If you go to the FIFA forums they talk Bs. About pes and they hate it.
In the Pes forums they respect Fifa and many will be getting the two and we aré confidente that PES11 is better and the kind is back

Is Anybody Out There?

Goodbye Youth - The End Of The PS2.

Football games: Worth every penny or a total con?

The 10 best PlayStation sports games of all time