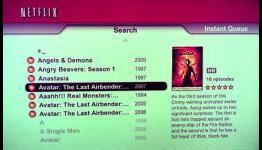 Netflix just became a lot easier to use on the PS3. No, you still need a disc (for now), but the application has been stealthily upgraded with the ability to search for and watch videos from the entire Instant library. For example, typing the letter "A" quickly revealed Avatar: The Last Airbender.

Nice. When it becomes disc free I'll use my PS3 for netflix!

Its that difficult for you to put in a disk? I guess you have no disk based games on the PS3 and just download everything.

It sounds like he has both consoles, and if you have the option between a disc free 360 or a PS3 that needs a disc, its an obvious choice.

I don't see any fanboyism here.

i saw this feature since last week when i order the netflix disk for ps3.... i thought that was old feature but still nice............(off topic) i was watching the whole season and episode of Heroes on my ps3 last week

I personally think my 360 elite is too loud, even without a disk in it it. And being my 3rd replacement, I have no need to turn it on if I don't have to. Its easy enough to stick a disk in the ps3.

You really cannot blame jaredhart for choosing convenience here. I hate having to swap a game I have been playing just for the Netflix disc.

I am loving this new search function! Now I don't have to sign in to Netflix with the slow as mollasses web browser.

The disk is really a problem, and I think it needs to be high priority to get rid of it. I am on my 5th Netflix disk in 3 months of service, and that's rediculous

Agreed, his comment made sense, unless you try to make everything on N4G a fanboy issue. Which some people just can't seem to help.

PLEASE bring this feature to the 360, I hate not being able to search. Such a basic feature.

Considering it is netflix's app I would assume a similar move will be made to the wii as well. Unfortunately for the 360, MS designed that UI and I would love for them to refine it to allow searching as well.

Interestingly enough, I have used both my psp and dsi to access the netflix site and add items to my instant queue. Funny how that works.

I use all 3 and like the look and feel of the 360 interface personally but this little update is certainly welcomed for the ps3 netflix users.

It took way too long to find my disc yesterday. I'm done with netflix on ps3.

I dont know about you, but my obvious choice would be having a search option =/

I have both, and mainly have been using my 360 netflix until the update last week.

I am previewing Hulu+ right now and I also subscribe to Netflix on my PS3. So far one of my favorite features that the Hulu app offers that Netflix doesn't is the ability to pull up the XMB and check what friends are online, read and send messages and it doesn't even pause or stop the show. I hope Netflix will do the same once it becomes disk free.

That's the ONLY allure I see in Hulu+.
But I'm still hesitant to shel out 10$ for such little content (compared to Netlfix)

Because you use your disc drive when you play a movie?

They're obviously stepping up their game because of Hulu+, and the consumer gets a better product.

[email protected]:
I expect that it'll be coming to the 360 and Wii versions of Netflix soon enough.

Though I can't help but notice that they "snuck" this into the disc version via an DL update. Irony much?

This option isn't new. I've known about it for months now.

This feature was added days ago and we just now get a article on it?

I got my Bravia LX900 and it has netflix built in so I can watch movies without even turning my PS3 on. They are in HD mostly.

But I guess it's good for others.

Netflix streaming on my PS3 is dire, constant breaks while watching a movie. Never figured out why, when I can stream perfectly through my PC, 360 or Wii.

I swapped cables and god knows what, but it never improves. I have about given up trying to watch netflix on my PS3.

Streams fine over my 5MB connection. Same for my 360, Roku and Wii.

Streams fine for me as well. I can see if you might have problems streaming wirelessly. Maybe your connection strength is week? Since you stated you have switched cables, I assume you connect via Ethernet cable.

and streaming is fine. its never cut me out of a movie

Seriously, I have all these with Netflix on them at my house. It's getting ridiculous.

I have a 16MB + speed boost connection.

360 no issues, Wii no issues, PC no issues all perform flawlessly. Yet try to watch Netflix on my PS3 and it's god damn awful experience. Swap the PS3 for the xbox and still the same.

I can stream two devices perfectly, yet I cannot stream well from netflix on my PS3.

Delete the Netflix cache off the PS3. It's under the video section of the XMB, under whatever the BD Live folder is.

I'll give that a try and see if that improves it.

i was having trouble with streaming Netflix on my PS3 a few months back also.

i checked my internet speed, and it was really slow (like less than 1MBPS).

i thought my computer may be virused, and it was eating away at my speed. after running a few different virus scans and coming up clean, i called contacted my cable company.

since it was a weekend, they said i'd have to call back the next day during business hours, but "mysteriously" about 5 minutes after talking to the tech, my modem rebooted itself automatically, and suddenly my connection was back up to it's maximum 6MBPS, and my PS3 has been streaming Netflix flawlessly since then (my PC also).

it could really just be your ISP server throttling your connection because they are assholes. that's what my problem was. if you don't call them on this stuff, they'll get away with it for as long as they can.

seriously? this feature has been on ps3 netflix for at least three months now...

for real. been on there for quite a while now

I watch Netflix almost every night and I didn't notice it until a few days ago.

this has always been a feature

OMG, thank you Hulu, for making Netflix up the ante sooner! Now imagine if the PSN Video Store starts getting competitive. haha

Their was already a search option for Netflix on PS3, and Wii.

yes, this has always been a feature! you're right

The more you handle the disc-the more chances of it getting scratched or broken.

It hasn't always been a feature. It was a feature for certain people. They were I guess testing it for some reason. I've had a search for months but my friend Tony has not. A search beta I guess? lol. They just made it standard

A first of its kind: Riot Games to permit co-streaming on Twitch for League of Legends' Arcane debut

Legend of Zelda Netflix Series Once in Production, Cancelled by Nintendo

Until 2012 You Could Watch Netflix On A PS2 In Brazil

Fan remakes classic The Legend of Zelda in Minecraft