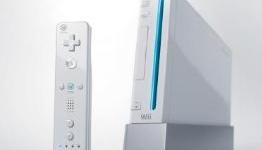 Wii Successor May Have 3D Support

IGN: Nintendo CEO believes 3D is the future for games.

So the Wii successor will be ... a PS3. Sorry, it had to be said. Good thing Nintendo still makes awesome games, or there wouldn't be any reason to buy their hardware.

...Well what would be the point of buying ANY video console hardware if there was no software to support it? You're pointing out the obvious.

With that in mind the Ps3 = Nvidia-vision + any low/mid-end pc?

There is no Cell cpu in low/mid-end PC. You fail.

Of course not, but then we have stuff like I-3,I-5,I-7.
Plus you arent limited to the gfx card that comes with it.

In the same way the Moves just a Wiimote?

Or does not that count because it's Sony making that?

The Move and WiiMote being similar is exactly why I made my point. An HD-enabled, more powerful Wii with 3D support would be just like a PS3 w/ Move.

Nintendo will be the one to make 3d mainstream with the 3DS.

Sony is Going to push the 3D aspect more harder then Nintendo because there in the Television Market as well. I see another "Buy a Sony Bravia 3D TV get a free Playstation 3 plus glasses" ad coming around Christmas time. DAMN I WANT A 3D TV and A 3DS

Reggie was talking shit about wearing glasses so they'll probably wait for TV's that don't use glasses, but who knows how much those will be or when they will be available. Otherwise Reggie just made an ass of himself on stage.

Not as much as Tretton made an ass of himself though because of the script. I nearly facepalmed when he claimed the PS3 was the only system with native 3D just two hours after the reveal of the 3DS.

Tis all marketing speak anyway, they all end up looking foolish.

I'm pretty sure he was referring to consoles, but if he wasn't I agree with you. He should have omitted that line.

Who would have guessed, not me!!

So, the next Nintendo console will be a PS3 with XBOX 360 graphics? LOL

When Microsoft refuses to move forward with Sony and/or Nintendo, or become stubborn with new tech, bad things happen for themselves.

Screw 3D! How about HD output this time, Nintendo.