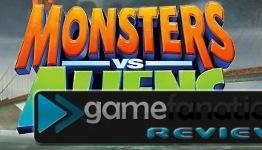 Chris B. of TGF writes:

"By now most gamers are immune to being sucked in to purchasing a video game that is based off a movie. For the most part the games aren’t based off the movie itself, and are usually a side story created using loose parts of the movie to tell it. Developer Beenox and Amaze Entertainment, with publisher Activision decided to throw their hats into the ring and take on the project of creating the home based console and handheld versions of the movie by DreamWorks Monster vs. Aliens."

Adhttps://store.steampowered.com/app/1488200/Symphony_of_War_The_Nephilim_Saga/?utm_source=n4g&utm_medium=native&utm_campaign=sow_n4g_native&utm_content=png
- Comments (0)+ Comments (0)
TopNewestOldest
The story is too old to be commented.
0°
6/10