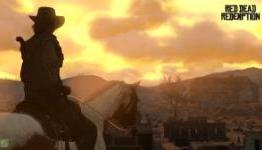 David Stewart of Spawn Kill straps on his spurs and shrugs into a leather duster to review Rockstar's latest open world masterpiece, Red Dead Redemption. To make a long story short: it's game of the year material.

I've never played a buggier game than this one. I wonder if they knew it would be bad and so they tacked on the extra missions to the PS3 version to sort of make up for it.

With 5mil more consoles, what do you think? The 360 doesn't sell it's weight in games though. With the amount of consoles out, it should have sold more.

I have it on PS3 and I've seen no bugs. And the online works just the same and it's free.

when it's all working as it should be, i'd agree with reviews in the 9+ range... but at this point, i don't think i would even recommend anyone buy it at all.

personally, my single player campaign (which i was really getting into) came to a grinding halt, ironically enough, due a glitch in a mission where a carriage i am supposed to ride shotgun in doesn't move forward, even though the horses are running and the wheels are turning.

reloading save points & trying many other things hasn't helped either. i get the same outcome every time. :(

This is the most overrated game I have ever played in my life! Bored almost the whole time playing it. Not my type of game at all.

the "horrible port" is only a drop in resolution, which coincidentally is higher than the resolution of say, HALO 3, and MODERN WARFARE 2. . .so according to you, the "worst port ever" on ps3 is right up with those games? and has 100 more lines of rez than alan wake, too, cuz we all know how 540p made that the worst game on 360, right? idiot

For some reason, I don't even believe that you've played the game.

I'm at 99.2% completion, level 12 online, I just need to finish off 3 more bounty locations in Nuevo Paraiso and get one more outfit and I think I'm done the single player.

I wasn't even talking about the quality of the graphics as some above have mentioned, but there are lots of issues there as well. Massive pop in, objects and NPCs floating or submerged below the terrain, random flashes of white pixels on the screen, sudden huge shifts in light levels that are not related to changes in time of day, NPCs getting stuck inside objects/terrain etc.

But I was referring to game play issues, such as the flakey controls, the game not allowing me to fire at times, randomly being shot at by friendly NPCs, randomly breaking the law without actually doing anything, stage coaches getting stuck in trees, bounty targets disappearing after you kill them such that there is no way to loot the body etc. There are just a whole host of problems with the game.

There was a mission with John and Seth in a wagon that I actually skipped because the AI was so broken that it could not be completed. The enemy were ramming their horses into the wagon and knocking it over, I was failing the mission within 5 seconds of restarting. I failed about a dozen times before giving up. Yesterday I went back and did it as it was my last uncompleted mission and I finished it first try with no deaths.

The game is good, but with so many problems I can't possibly consider it great. Plus the story was far too predictable.

if anyone has the same problem, i finally found a fix thanks to a suggestion from an XBL friend.

1. Exit from the mission to dashboard
2. Go to System Settings in dash and Clear System Cache
3. Reload game (and cross your fingers)

kind of off topic, i know... but i couldn't find a fix for a week and didn't see anything really online anywhere, posting here so maybe this might help others.

now that i can play again, my love for the game has definitely returned.

Nice review. Haven't picked this up yet due to lack of funds, but I might as soon as the price drops.

On Topic: RDR is a great game. I was more sucked into Oblivion and Fallout but it is still way up the list of stellar games. 28 hours in and only 65% completed. Just can't stop hunting bears.

i;ved played it for like 4 days strait and i find no bugs.
quit hateing on the ps3,i have all 3 system,so i;m not a fanboy....
really good sound,and grafix.i cant stop playing it.

The End of Red Dead 2: The Special Merits of the Video Game Medium

How Grand Theft Auto and Red Dead Dominated a Genre