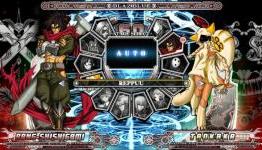 PSFocus writes: "Fighting games were just after the launch of the PlayStation 3 but not in large numbers, but last year there was slightly changed with UFC Undisputed 2009, WWE, Street Fighter IV, King of Fighters, and more. In 2010 we go further, because before too long there appears a new UFC Fighter IV and Super Street is just off. Besides these big names is another 2D fighting game in the genre belongs and that is BlazBlue: Trigger Calamity and this game, we also have equally good views."

the translation in this is terrible.

Anyways I've already got the game and it's pretty fun. The only problem I have is that 1/2 to 3/4 of the people who play online are from Japan. This makes it so that you either can't connect to hem because of latency, or you can connect and the game just lags like all hell.

Luckily you can see latency, so if you do get the game make sure you pick rooms with green bars.

Game is really easy to pick-up, and it includes enough stuff to keep experienced players entertained.

BlazBlue And Guilty Gear Games Are On Sale For Xbox 360

Bandai trademarks "Tales of Arise: Beyond the Dawn" in Europe