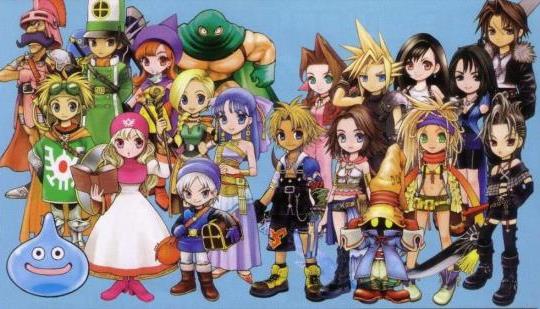 Square Enix, the juggernaut Japanese publisher that we all know today, was pretty much birthed on this date 20 whole years ago. As the name suggests, it was a merger between Square and Enix — two prominent gaming companies who, were actually rival businesses before they agreed to join hands.

Adhttps://www.releases.com/?utm_source=n4g&utm_medium=native&utm_campaign=c1
- Comments (35)+ Comments (35)
TopNewestOldest
Expand all
The story is too old to be commented.

One of the worst mergers ever

Yup. Killed a lot of creativity just for money.

A lot of Square's talent left because of lack of creative control and upper management.

Some games like Koudelka that were made by ex-Square employees were flawed gems but I'm glad they exist.

@kingnick I have 2 copies of Koudelka , it’s a flawed game but they went out of the box and I love it

A lot of brain drain occurred well before the merger and continued post merger so SE was always going to underperforming relative to Square at its peak.

Sad that Final Fantasy The Spirits Within was such a costly failure. Lost Odyssey was great and felt like a homage to Square of old.

True, only old gamer would understand how much we’ve lost from this merge.

Remember when Squaresoft created and published more and more great games of different genres? Like Bushido Blade? Parasite Eve? Xenogears, Einhänder and Tobal and the Japan only Racing Lagoon? Or even the 2 Wrestling games they released in Japan for the PS2 that were pretty good actually but never made it outside Japan? How Enix was once known for other games than just Dragonquest and published games like Bust A Groove? Yup..that was all before the merger.

After the merger..you got only a few good games from them that weren't totally directed at the mass market.

and I was fucking wrong..they actually released THREE wrestling games there not 2.

Bringing all that up makes me sad and miss the old days.

SE very much played it safe which isn't surprising since Hironobu Sakaguchi advocated for many of the more unique games Square put out which other executives had doubts about. After the failure of Final Fantasy: The Spirits Within the remaining executives became even more conservative because they likely didn't want the disgrace that comes with supporting projects that are seen as failures having seen what happened to Sakaguchi.

They still make games not directed at the mass audience. They just aren't the big budget games which are advertised heavily or made by Square themselves. Drakengard, Nier, Bravely Default, I Am Setsuna, Octopath Traveler, etc. All great games IMO. With the business how it is now, it's more costly taking risks than it is to go with something that's tried and true. More costly in the fact that something new might not make them the money they want so they go with something they know will sell like a new Final Fantasy game or make a game using a recently popular IP like Avengers when the whole MCU blew up. Look at EA, Activision, Ubisoft, Konami, Capcom. They have so many great IPs they're just sitting on and doing nothing with because they aren't the recognizable IPs anymore. Square has always been known for big, epic, RPG adventures. Sure they might dip in to other stuff but that's their bread and butter.

One of the saddest days in the industry

it is by far one of WORST collaboration that has ever happened to an iconic company like Squaresoft , not only we've been cucked from getting a Parasite Eve remake under the name "rebirth" in 2003-4 on the PS2 but also marks the moment that we witness the decline of their quality in making games

The companies had very different management and cultures.

Enix outsourced wherever possible while Square had many closeknit groups of developers who enjoyed working together and experimenting and would later collaborate at other developers.

The moment they became a shadow of their former selves...

Probably the worst merger I've witnessed in gaming. Both companies came out far worse. Both became so creatively bankrupt. If Spirits Within hadn't failed, or been made at all, the merger might not have happened.

Apparently a lot of people enjoy getting shit games with shit writing, created with 1/10 the creativity and passion they used to be. That explains a lot about where the industry is headed.

It killed what used to be one of my favorite series. Final fantasy. Same with Capcom and resident evil. Hated everything ff since after 10 which was square Enix but extremely early if I'm not mistaken.

FF sucks since XIII not XI and XII ..!

Maybe it's an age difference but me being an older gamer I definitely felt the change during 10. No world map etc. Ff11 eh opinions. Ff12 just bore none of the characters drew me in and made me care. It just didn't sit with me, no world map, I hated the battle system that was the change that started the actiony ffs.

Agree with shinoff2183 FF12 was bore fest, it was the beginning of flood gate of shit games from Square Enix.

Lol, is this site owned by square enix? Every single comment is what a bad merger this was and each one has double digit downvotes

It’s just a bunch of old dudes reminiscent of their formative years associating them with a corporate merger. It’s cringy.

I know alot of these younger gamers have downvoted me in other articles specifically about ffs and not liking the newer ones. The younger generation just doesn't have the attention span older gamers have and need action in your face or its boring to them. Square said it themselves sh.
https://www.cbr.com/ff16-tu...

I tried telling a few Xbox friends at work about dq11 cause it was on gamepass. I think dq11 is one of the best games I've played jrpg wise. They said they liked it alot. Neither lasted more then 2 weeks with it.

Squares gonna eventually lose older gamers that helped make them who they are. I like alot of newer games for sure but square dont put out games i love anymore. They used to be quite good at it. In fact maybe the best

And I know they created a ton more great games when they were separate companies,

Fourteen isn’t old. You still have a lot of growing and disappointments ahead of you.

And then Square never had to try again.

I just want the old Squaresoft back

Sakaguchi was able to get a lot of concessions from upper management because of the success of Final Fantasy up until Final Fantasy: The Spirits Within.

Even if Sakaguchi hadn't resigned I don't think Square could have continued their legendary run, they just lost too many creative and passionate people that were replaced by corporate climbers.

its not like all square games after the merger sucked, FF7 remake was game of the year for me when it came out, and ff14 RR seems to be doing great... their other games hit or miss.
looking forward for final fantasy 16

Ff7 remake I did like after at first hating it. Still would much more preferred an old school experience with the battle system and such. I the new one won't have a world map. Square don't do that anymore. When thinking of remake I and I know I'm not alone just wanted ff7 with great graphics. Like I said it was good in the end not my goty but I felt at times it was just to in your face actiony